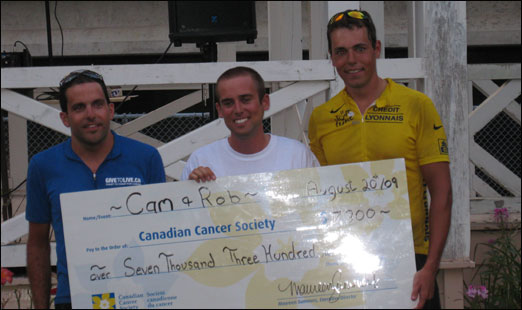 Cam and Rob pedalled away from Vancouver on July 1, sleeping in their tent in fields along the way. They rarely spent money on hotels. Chris joined the pair in Winnipeg, and they wheeled into Fish Hatchery Park on Thursday, August 20, to the delight of friends and family.

Together, they raised over $7,300 for GIVETOLIVE, a charity co-founded by Haligonian Todd MacDonald.

This year, GIVETOLIVE will provide funds to four cancer-related organizations: The Lance Armstrong Foundation, Ovarian Cancer Canada, the Canadian Cancer Society, and a locally-run charity, Craig’s Cause for Pancreatic Cancer.

MLA Kelly Regan was present at the homecoming. “What really impressed me about Cam and his friends”, says Regan, “is that they’ve just spent a year in a gruelling program, and then they go out and do this for their summer ‘vacation’. That, plus the fact that they weren’t spending their nights in hotels. They slept in their tent, and say they managed to get a shower about every six days”.

For more on this charity or to donate visit Cam and Rob’s website at www.camandrob.givetolive.ca.