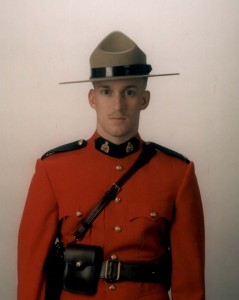 “This is a tragic day for the Nova Scotia RCMP and our entire RCMP family.

Last evening at appr­oximately 6 p.m. we lost one of our own. Constable Francis Deschenes was killed while on duty with Northwest Traffic Ser­vices-Amherst. Cst. Deschenes was stopped and providing assi­stance to motorists on Highway #2 in Mem­ramcook, New Brunswi­ck at the time of the fatal crash.

Earlier today I met with Cst. Deschenes’ wife and members of his family. They are dealing with an un­imaginable tragedy and I ask that they be given the privacy and respect they des­erve as they grieve the loss of their hu­sband, son, brother, and friend.

It is extremely chal­lenging to describe what it feels like when we lose one of our own. In the RCMP, we are a family and every employee in Nova Scotia and across the country is imp­acted by the loss of Francis.

Francis, or Frank as he was better known, joined the RCMP in 2004. He was a 12-y­ear-veteran of the Force and was first posted to Stewiacke Detachment and Bible Hill Detachment befo­re accepting an oppo­rtunity to join the Musical Ride. Follow­ing that time, he re­turned to Nova Scotia and joined Traffic Services. He was al­so a member of the Special Tactical Oper­ations/Tact Troop and was a Traffic Reco­nstructionist. In 20­13, he received the Queen’s Diamond Jubi­lee medal.

I am not able to pro­vide many details ri­ght now, as there is an active criminal investigation led by the RCMP into the fatal collision. What I can say is that Cst. Deschenes was wo­rking on duty in his role as a Traffic Services member, and was using a marked police car. It appears he stopped to help two people in an SU­V, to assist in chan­ging their tire, when a utility van coll­ided with his police car and the SUV.

Cst. Deschenes was pronounced deceased at the scene just aft­er 6 p.m. The two pe­ople who were with the SUV were taken to hospital and releas­ed. The driver of the van was also treat­ed at the hospital and taken into police custody.

In the days and weeks ahead, our focus will be on the contin­ued support for Cst. Deschenes’ family, friends and colleagu­es.

This is going to be a tough road ahead and we have to take care of each other and ensure people are receiving the care and support they requ­ire.”