Hmm. With only a handful of Mad Men episodes left, I have to say it: this week’s episode didn’t spend these precious remaining moments with people I particularly cared about. 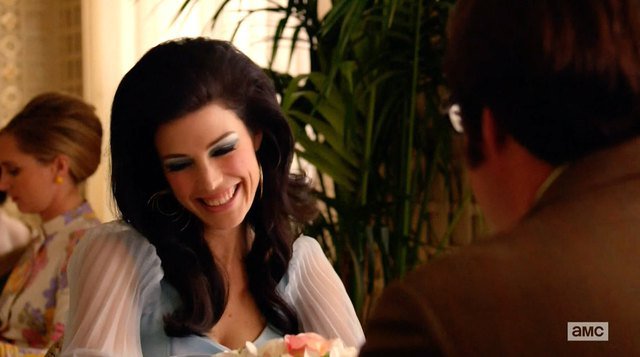 As always, no spoilers, so only click if you want to read about the episode “New Business”.

This episode was about vicious cycles, and being trapped in a life where you’re doomed to repeat mistakes. I enjoyed the early look we got at Don viewing his old family as an outsider, observer how well they seem to be doing without him. But I must say, the Megan drama wore on me. I never felt like this show really knew who Megan was, she has worn many different personalities over the course of the series.

Megan now hates Don, and I interpreted a lot of this episode as telling us there’s no way around that – ex-wives will always be bitter and greedy. Megan has every right to be angry with Don, to hate him. But I just didn’t find the breakup process very interesting – though I did get a kick out of Harry Crane’s pathetic attempt to get Megan into bed in exchange for helping her career.

Megan is struggling in California, not booking a lot of gigs. In this moment in her life, she seemed very sad and very selfish.

Then there’s Don and Diana. I’ll admit, I don’t really get it. Yes, Don is repeating his past mistakes by allowing himself to think that a woman will solve all his problems. But I didn’t see their chemistry, and I didn’t understand why he felt that way about this particular woman. Why he thought that they would be able to solve each other’s immense problems. 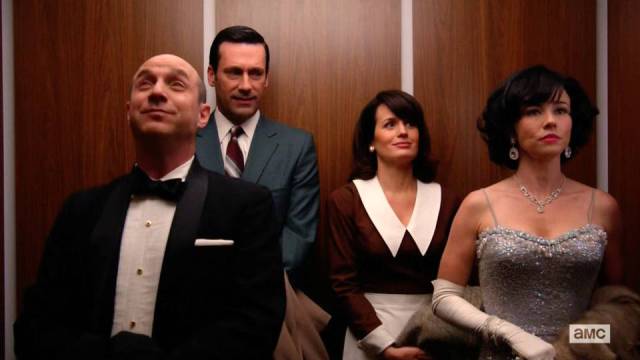 I did find this scene in the elevator intriguing though, since both Diana and Sylvia knew exactly what was going on. Don’s current lover is wearing a waitress uniform, and his former lover is in an evening gown. The guy doesn’t exactly have a type, does he? (Though, yes – Rachel, Megan, Sylvia and Diana are all brunettes, and I’m sure if you dig deeper you can find other similarities. Betty stands out as the blond, and the mother of his children.)

I preferred Peggy’s storyline this week, in which she hired an artist named Pima to shoot an ad – mostly because I found the actress, Mimi Rogers, quite captivating. Pima slept with Stan and flirted with Peggy. She only fooled the former, though – Peggy knew that Pima was just trying to lock down more work. Peggy expected more from Pima, I think because she’s a woman in a suit instead of a man, and because she’s an artist and not an advertiser. But once she got close, she saw that Pima was just as disappointing as all the suited ad men she’s known over the years.