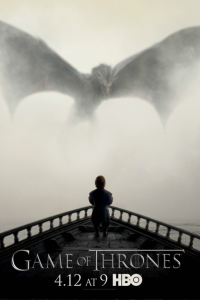 I won’t be reviewing Game of Thrones weekly this season because, a) let’s face it, my reviews of this show have never been that great and, b) there’s so much Sunday night TV on right now, it takes me all week to watch it.

I did watch Game of Thrones live on Sunday night, mostly because my husband loves it and neither of us were in much of a rush to watch The Good Wife. (I have not been feeling that show lately.) I really liked the episode, and I was pleasantly surprised to be able to follow the entire storyline. I was sure I’d have forgotten entire characters and plot developments.

I was sad we didn’t get to see anything from Arya, since she’s my favorite character. But scenes with Daenerys and Sansa sufficed. Daeny has been a beloved ruler for so long, it’s interesting to see her reach this particular roadblock. She’s the Mother of Dragons, but she’s lost control over them – and with that, she’s lost control over a lot of people.

Varys and Tyrion are on their way to find her, and I hope they do. The main problem with the Daenerys storyline is that it often feels so disconnected from the rest of the series. Putting her in the same place as a Stark or Lannister would help liven things up.

Speaking of Lannisters, it was very interesting to learn about the witch’s prophecy for Cersei. It helps to explain why she’s such a miserable person, and why she’s so suspicious of Margaery.

Brienne has given up on trying to help Arya, but is still on the hunt for Sansa – and sadly, had no idea that Sansa and Littlefinger were riding past in a carriage. Sansa’s hair was darker – is it meant to disguise her? Her red hair made her look more like Catelyn, which I assumed Littlefinger would prefer.

Two characters I’ve always had so little interest in are Jon Snow and Stannis Baratheon, so  I suppose it’s nice that at least now their scenes have been consolidated. Jon Snow could not convince Mance, the leader of the Wildlings to join Stannis’s army. Mance was supposed to burn to death, but Jon put him out of his misery with an arrow. It seems like Jon and Stannis are bound to butt heads.

What did you guys think of this episode?