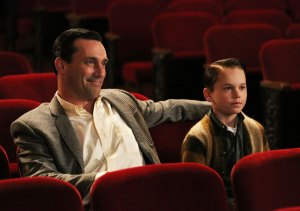 To remain “spoiler” free, if you can call it that when we’re talking about a historical event, click through for the review. I can’t wait to talk about it with you.

This episode, called “The Flood” was about the assassination of Martin Luther King Jr. and how the characters in the Mad Men universe reacted to it. As this show has weaved its way through the 1960s, there’s been a lot of conversation online about how much it was showing of the civil rights movement, and how much it should show. It’s been clear that Matthew Weiner has been more invested in telling the story of women’s equality than racial equality. Is that because the story of racial equality isn’t one you’d yet find on Madison Avenue in 1968, or is it because he’s fearful of telling the story poorly?

The show has never completely ignored racial politics but it has always told the story through the perspective of white characters. Paul Kinsey and Lane Pryce both had African American girlfriends, and last season Dawn was hired – the first black secretary at SCDP. This season, Peggy also hired a black secretary and we got a glimpse into Dawn’s life outside of the agency.

I do not know a lot about Madison Avenue and the ad world in the 1960s. Almost everything I know comes from this show. But it rings true to me that there would not be a lot of diversity in that world, or even a lot of attention paid to the issues of racial equality. Only when it affected work. So it made sense to me that this episode would not be a historical summary of King’s assassination, but a depiction of how these white characters would react to it.

What I took away from the episode was that although most characters felt sad about the tragedy, they also couldn’t help but make it about themselves. The tone was set from the beginning, when the advertising awards banquet carried on despite the news – which organizers had intended to keep from guests until the end of the night, but it was shouted from the back of the room.

One of the best moments of the episode was the argument between Pete and Harry. I never would have guessed in season one that I would agree with Pete and despise Harry, but I also love how layered and complex these characters can be. Harry only reacted to the tragedy as a businessman, annoyed with the inconvenience of media coverage ruining his TV advertisements. It was despicable. Pete, for once, was the sympathetic one – and it’s been established before that this is one area where he is sympathetic.

But Pete also couldn’t help but make the tragedy about him and his experience. He disgustedly reminded Harry that King was a husband, a father to four children. The event was a reminder to Pete of what he himself had lost. He reached out to Trudy, and I believed that he was genuinely concerned for her and Tammy. But she brushed him off, and wouldn’t let him come home. Some of Pete’s anger about the assassination was also anger at himself, over what he’d lost.

Peggy used the opportunity to try and get an apartment she wanted to buy at a lower price, upon the suggestion of her realtor. Abe, a journalist, rushed to Harlem in a tuxedo to cover any riots, hoping for a big break with the Times.

It was interesting to see Peggy and Joan both interact with their black coworkers. No one expected them to come to work, because of mourning and safety and other reasons. Both did, though when Peggy told her secretary Phyllis to go home they shared a hug. Joan tried to hug Dawn, and Dawn clearly had no idea why it was happening. Joan is usually so professional and aloof. I’m not sure what this tells you about Joan (who also cried upon hearing the news), but I thought it was an interesting scene for Dawn, who told Don and Joan that she’d rather be at work.

Don put himself at the center of the tragedy by spending most of the episode worrying about Sylvia, who was in D.C. where riots were the worst. Megan dealt with white guilt by complaining about her father’s political views and taking the kids to a vigil in the park. Betty was almost in a state of denial, trying to shelter the kids from what was on TV and ignoring any unrest by insisting that Don stick with their custody schedule. (The way she referred to Megan as Don’s girlfriend was a classic bitchy Betty moment.) And Henry took the tragedy as an opportunity to consider his own political ambitions, deciding that he’ll run for senate.

There were other interesting moments, too. Bobby’s interaction with the African American movie usher was I think meant to be more poignant than I personally found it to be, and Don’s revelation to Megan about how you eventually develop the feelings towards your children that you pretend to have at the start was interesting only because of the intense hypocrisy of Don Draper. He lets Megan take care of the children rather than being involved himself, and even his words of comfort are also a dig at Henry.

I wasn’t sure exactly what to make of Ginsburg’s storyline, but I did find it revealed more about a character that I’ve always been interested in. There were so many little moments that I liked, from his father pulling a blanket back up over his eyes when Ginsburg told him the news of King’s death, to Ginsburg’s manic admission to his blind date that he’s a virgin.

One sweet moment, in the midst of a sad episode, was the look on Peggy’s face when Abe mentioned having kids. It’s interesting to watch Peggy’s relationship with Abe, because he’s obviously a very forward-thinking guy,. yet gender politics are still a part of this relationship and there seems to be at least a little discomfort over Peggy being the main breadwinner. When Abe confessed that he hadn’t wanted to live in the East Side anyway, and imagined raising their kids somewhere more diverse, Peggy’s silent reaction was priceless.

I really want to hear what you guys have to say about this one, so take to the comments!