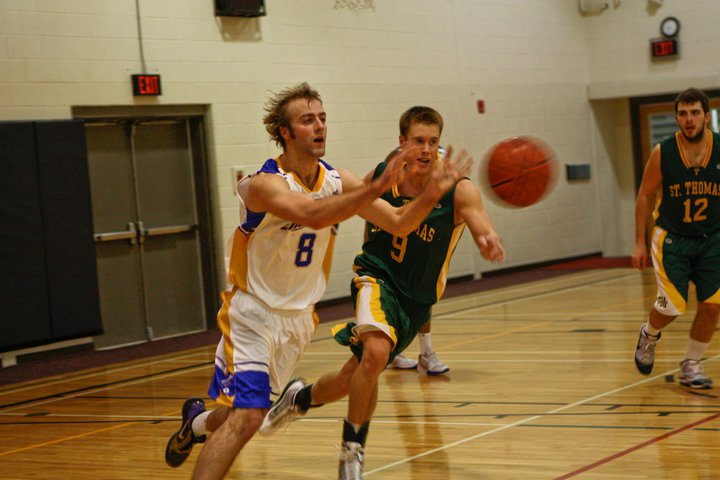 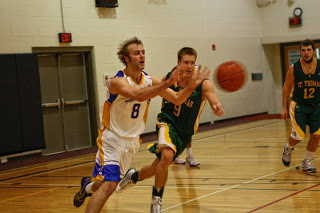 by Brandon Wile
It only seems appropriate that Matt Robertson’s ACAA basketball career
could end against the team where it all began.

The fifth year centre for the Crandall University Chargers will take
on his former alma mater, the St. Thomas Tommies in the opening game
of the ACAA playoffs at Mount Saint Vincent University this weekend.

In his final year of eligibility, Robertson leads the underdog (6-15)
Chargers against the (14-7) Tommies in hopes of upsetting the school
which he called home for four years.

“My goals are simple, I want to win,” said Robertson when asked his
objective for the upcoming game.

The thought of playing against former teammates is something Robertson
uses as motivation rather than a deterrent to playing hard.

“It’s really easy to get motivated playing against those guys because
of the relationships I have with them. You don’t want to let them get
the best of you, because they’ll never let you forget it. So these
games are for bragging rights.”

So far, Robertson and his Chargers haven’t had much to brag about in
regards to the Tommies as they have lost all three matchups this year.
After being blown out in the first game by 22, the Chargers made the
second and third meeting much closer losing by nine and ten
respectively.

Robertson was a highly decorated member of the Tommies basketball team
for four years, where he received team MVP and all-conference honours
in 2009.

This time last year, Robertson wasn’t sure if he would ever play
basketball again at the ACAA level. His then Tommies were just knocked
out of the playoffs by the Holland College Hurricanes and he was
gearing up for graduating with a degree in journalism. By the time
Robertson decided to pursue an additional degree in education, St.
Thomas’ application deadline had already passed.

The Moncton, New Brunswick native was lucky enough to make the
deadline at Crandall, which allowed him to continue playing close to
home. The opportunity to further his education while continuing to
play basketball made the choice of leaving St. Thomas a little easier.

“It wasn’t a tough decision at all. I knew it would be busy and I knew
it would be kind of weird having to play against STU, but I knew that
I would regret it if I didn’t lace up the shoes for one more year.”

It’s been an up and down season for the Chargers as they snuck into
the playoffs with the sixth and final seed. The team only had nine
players at tryouts, one subsequently was dismissed for being
academically ineligible, dwindling the number to eight. However, the
low number of bodies is something Robertson attributes to being a
strong point of the team.

“When you only have eight [players], you have to be tight or else
you’ll fall apart when the going gets tough. We’ve pushed through the
adversity and it’s been an unforgettable year.”

Robertson was on first name basis with the schools President. He
received arguably St. Thomas’ highest honour, the John Frederick Walls
Award for community commitment, not once but twice. On top of all of
that, he was offered a recruiting job for the university after he
graduated.

His reach in the St. Thomas community could be seen in late November
when Robertson made his return to the South Gym in Fredericton, this
time entering the visitors locker-room. He was greeted by cheers and
boos every time he touched the ball. The pressure may have gotten to
him as he had a less than stellar night.

“I was so nervous. Going back home in front of all my friends, playing
against all my ex-teammates. I stunk up the joint. I shot like 2-14,”
Robertson joked.

As the season progressed, Robertson became more comfortable against
his old team. Game two saw him get a double-double with 18 points and
10 rebounds, while he added 16 points in the third game.

Being one of the veteran leaders, Robertson hopes his experience and
strong post presence will help lead the undermanned Chargers over the
Tommies and make a deep playoff run.

Robertson admits that he will always be a Tommie at heart, but when
he goes for the opening tip Friday, he will put aside the memories of
his four years at St. Thomas, the friendships that he made and the
times he’s worn the green and gold. All that will be on his mind is
knocking out the school he used to call home.

Brandon Wile lives in Halifax and is a local writer and broadcaster. Follow us on twitter @_sportstream_.