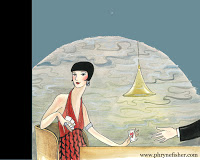 Writing the Phyrne Fisher books (m), Australian author Kerry Greenwood has created quite an entertaining and successful mystery series. Set in 1920’s Australia, it has resonated widely with readers around the world – especially in Australia where it has inspired a hugely popular TV Mini-series.
NoveList describes the writing as “character driven and fast paced, with an engaging, witty writing style.” The overall tone is humorous and the Australian setting is a key appeal. Checkout the author’s cool website for this series for more details.
Phyrne Fisher first appeared on the scene in 2005’s Cocaine Blues.

“The London season is in full fling at the end of the 1920s, but the Honourable Phryne Fisher – she of the green-grey eyes, diamant garters and outfits that should not be sprung suddenly on those of nervous dispositions – is rapidly tiring of the tedium of arranging flowers, making polite conversations with retired colonels, and dancing with weak-chinned men. Instead, Phryne decides it might be rather amusing to try her hand at being a lady detective in Melbourne, Australia. Almost immediately from the time she books into the Windsor Hotel, Phryne is embroiled in mystery: poisoned wives, cocaine smuggling rings, corrupt cops and communism – not to mention erotic encounters with the beautiful Russian dancer, Sasha de Lisse – until her adventure reaches its steamy end in the Turkish baths of Little Lonsdale Street.” Publisher
The nineteenth installment is Unnatural Habits.

“1929: pretty little golden-haired girls are going missing in Melbourne. But they’re not just pretty. Three of them are pregnant, poor girls from the harsh confines of the Magdalen Laundry. People are getting nervous. Polly Kettle, a pushy, self-important Girl Reporter with ambition and no sense of self preservation, decides to investigate–and promptly goes missing herself. It’s time for Phryne and Dot to put a stop to this and find Polly Kettle before something quite irreparable happens to all of them. It’s a tale of convents and plots, piracy, murder and mystery… and Phryne finally finds out if it’s true that blondes have more fun.