After considerable variation in the long range weather guidance, there is finally enough consistency to share a more detailed scenario for late Sunday and into the early part of next week (as kids return from March Break in Nova Scotia and begin March Break in PEI).

A low pressure system will develop off of the USA mid-Atlantic coast early Sunday and slowly develop and track towards the Maritimes.  Snow from the system will begin in southwestern sections of Nova Scotia on Sunday afternoon, reaching Halifax in late afternoon and Cape Breton, Prince Edward Island and parts of southern New Brunswick in the late evening. Snow will then change to a wintry mix of precipitation overnight and finally to rain in Nova Scotia.

As the snow intensifies in the evening, it may fall at a fast rate of 2 to 5cm per hour. While there is still some variation in predicted snowfalls…  expect totals ranging at least between 10 and 20 cm in much of Nova Scotia before the changeover.  Hopefully lesser amounts in NB and PEI. 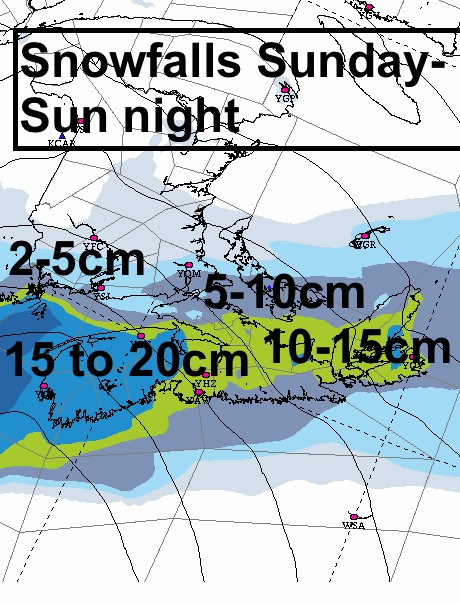 As the system continues its track northeastwards Sunday night, the snow will change through freezing rain and then to rain in Nova Scotia.  A wintry mix of precipitation will persist on Monday into Tuesday over parts of Prince Edward Island and New Brunswick.

The rain on top of the heavy snow will make for a sloppy mess in Nova Scotia, since in excess of 25mm is likely, with double that possible. 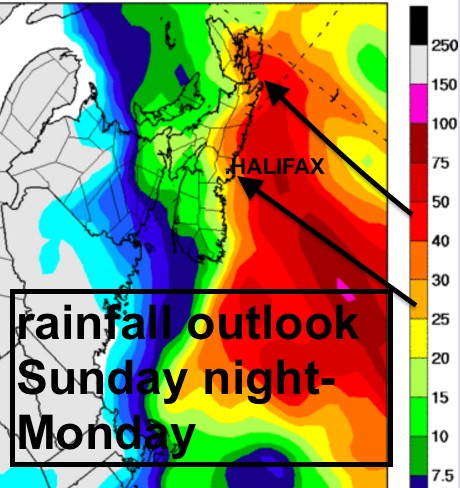 Road travel will become difficult Sunday evening and overnight as the snow spreads across the southern Maritimes.  The changeover to a wintry mix then rain will make for slippery and slushy road conditions Monday.

Some flights will be cancelled, especially during periods of heavy snow and freezing rain.

If its possible to clear any snow before bedtime in mainland NS, it might make the Monday morning shovelling much easier.

Some power outages will be likely with the gusty winds and freezing precipitation.  Hopefully not widespread.

Localized pooling or flooding is also possible with the heavy rain and snow melt over parts of Nova Scotia.

This is a system still in the development stage, which will be intensifying over the data-sparse ocean. Expect uncertainty. Since I’m writing this outlook Saturday morning, the details will change, and there will be pleasant and nasty surprises.  Environment Canada has issued a Special Weather Statement for Nova Scotia and Prince Edward Island.  Keep up to date on the latest forecasts; and warnings will begin to be issued this afternoon or Sunday morning.