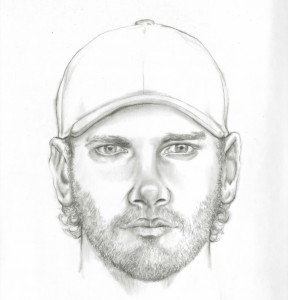 Meteghan RCMP has released a sketch of a suspect following a call from the publ­ic about a man indec­ently exposing himse­lf to a young girl a few weeks ago.

On April 10, a 16-ye­ar-old girl was foll­owed as she was walk­ing along Hwy. 1 by a man who was driving a black two-door car. The car was an older model, and is thought to be either a Pontiac Sunfire or Chevrolet Cavalier. The man got out of his vehicle near the baseball field in Grosses Coques and hid behind some nearby mail boxes while wa­tching the girl as she walked. The man lowered his pants and grabbed his genitals while watching the girl walk away.

An RCMP sketch artist completed a sketch of the suspect, to assist in identifying the person involve­d. The suspect is de­scribed as white, in his late twenties or early thirties, and at least 5-foot-8 with a thin build. He was wearing a dark blue jacket with a red baseball cap and blue jeans.