If, up until now, you’ve associated Mexican food with slathering as much melted cheese, sour cream, and salsa on some kind of soft or hard tortilla let me just direct you to a restaurant in the city that can sort you out stat.

The only way to describe Mexico Lindo is to say that it’s a hole in the wall. Really and truly. But don’t let the basic decor deceive you. This is as authentic an experience as it gets. Tucked away in Fairview, you may have never heard of it before. I believe it used to be neighbours to a Hells Angel club but, after that got shut down, it no longer holds that distinction.

The food is comparable to the few places Cokebaby and I were able to eat at while doing the resort thing in Mexico a few years ago. Off the resort, of course. Or the Mexican food we’ve had in other cities. It’s home style cooking by co-owner of the husband-wife team, Ana Jimenez.

Instead of getting a bread basket to snack on while you wait, you start with yellow corn chips and salsa. The salsa itself is fresh and spicy. And when I say spicy, I mean it’s definitely not for those for find honey garlic wings burny, if you know what I mean. 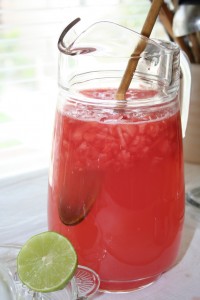 We were lucky enough to be there on a night when aqua fresca was available (in watermelon!) so we ordered a pitcher ($6.99) for the table of four. Aqua fresca is a brilliant combination of fruits,  sugar and water, blended together to make a refreshing beverage.

I had the vegetarian enchilada combo: Tortilla soaked in spices and lightly fried, filled with vegetables (options for chicken, beef) and topped with cheese, onion and sour cream ($10.95). Cokebaby went with the chicken chimichanga & enchilada combo ($13.95). A chimichanga is a lightly fried burrito in butter (chicken, beef or vegetarian) topped with tomato, onion and sour cream. The combos are served with reasonably sized portions of rice and refried beans.

Personally, I’d like to see some other interesting items on the menu. They’ve got something called tepa which is tasty if you like that sort of thing: Large tortilla filled with potato and spicy sausage, topped with HOT SALSA, cheese, lettuce and sour cream ($5.99). I wouldn’t turn down a tamale, something in mole sauce, or tortilla soup though.