Nothing can throw a wrench into your resolve to staying “on track” more than going out for dinner where you are not in control of what goes “into” it, am I right? Or does it?  Well, on the flip side, nothing can make you feel better and empowered with in keeping with your plan than creating  an appropriate balance between treating yourself and making great choices!

Last night it was a “holiday” night for us in Canada because today is Remembrance Day (comparable to Memorial Day in the U.S.).  It was a special evening because we were attending a surprise birthday party for the husband’s business partner.  He never suspected a thing because it birthday had already passed and he thought he was “in the clear” and it was a Tuesday night!  Perfect!

So rather than make supper after work, we decided to go out. *cue scary music in my head* lol  This would be the “first” dining out experience since joining the WW meetings.  I wasn’t 100% comfortable with it, but I decided I wouldn’t hold back and to trust myself.  I also realized I still had around 10 POINTS left for the day and 25 Flex banked for the week PLUS APs.  My day re-starts on Saturday, and I realized that it was the perfect night to indulge and use them while still giving me enough time Wed, Thurs, Fri to get lots of activity etc.  PLUS I always had success throwing in at least 1 higher POINT meal in the mix once per week.  This keeps your body happy that you’re not starving it because when you are losing weight, you are almost always restricting calories. And when my metabolism is happy, I am happy 😉

We decided on Jack Astor’s.  They have the BEST spinach & artichoke dip EVER.  Even the husband loves it and well, it blows my mind because the only thing in there that he EVER would normally eat would be the cream cheese!

Obviously pure badness!!!  Since he was really looking forward to ordering it, and I knew if he was ordering it I would have some, I quickly modified my choice for my main.  If there was no appetizer involved I would have likely gotten a grilled chicken sammie on a foccocia with a side salad (the Mediterranean one rocks), but since this dip was SUPER high, I think I made an excellent choice: 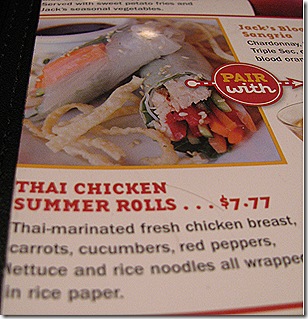 This is a new menu item and it’s actually an appetizer.  It’s served cold.  It’s mostly vegetables!  To make sure I was leaving the restaurant satisfied, I ordered a side of garden fresh veggies too:

I definitely had my share of the nachos with the dip, but we didn’t clean out the dip itself.  I counted my portion of the dip & nachos as 12 POINTS which I think is fair.  I googled the NI and came back with this which surprises me.  I thought it would have been higher.  This is assuming that the serving that they give you is 100g which could be true, because the dish really wasn’t that big.  It definitely doesn’t include the nachos.  Even if my own consumption was 100g I still think my estimate is a good one.

It was absolutely delicious, worth every POINT and I felt like I wasn’t missing out on something I wanted which is KEY for long term success!  I didn’t take a picture of it because quite frankly, I didn’t think it was something to be featured as a “good” choice, but I do want to show you the rest because it ended up being a PERFECT compliment! 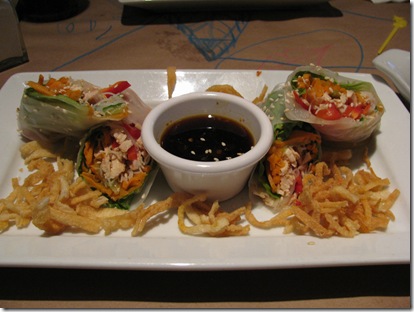 There were so neat! They are served cold (they tell you that when you order so you’re not surprised) and really it was mostly veggies and very light on the chicken and noodles: 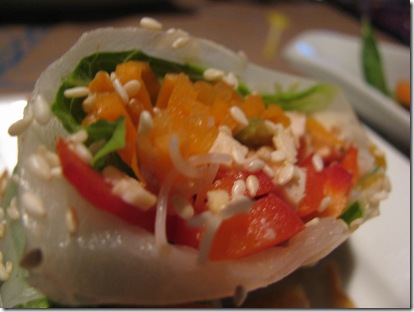 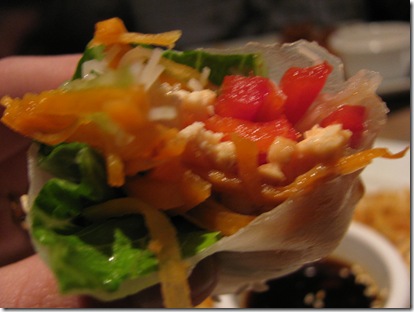 They came with these crispy noodles, which I didn’t eat many of at all.  The sauce was sesame-ginger soy sauce for dipping and all in all I felt great eating it!  I counted these as 6 POINTS and the veggies as 1 POINT since there was some butter of some sort on them. 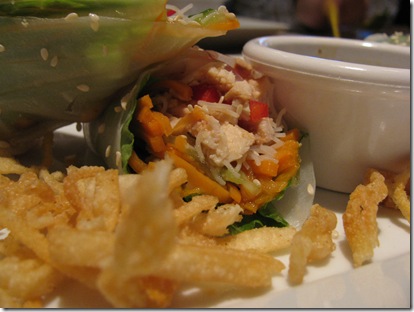 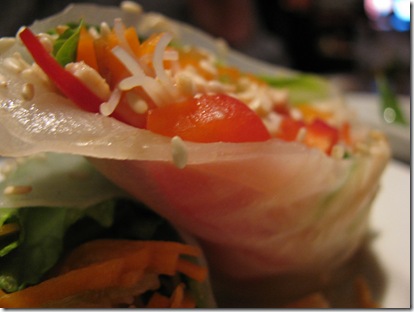 I love their side veggies and I was 100% satisfied when I left.  I wasn’t over full and I indulged in an amazing treat.  I’m definitely going to order these side veggies every time I go there from now on! Then we headed over to the surprise party where the birthday boy was completely fooled and surprised (so fun!).  I went there on a full tummy which is a good idea when attending a party with lots of tempting nibbles!  I wasn’t going to be drinking any alcohol and ended up having two cranberry juice + club soda spritzers (thanks to Christine who was quick to point out that alternative to me 😉 ) and I had a few nibbles of cheese, crackers and hubby and I shared a very small piece of cake.

The cake! I wish I had of taken a picture of the cake!  It was so nice that it was a shame to cut it!  She had it specially made, two tier with fondant icing and it had a little Macbook laptop made of icing, a guitar and a coffee mug which pretty much sum up the birthday boy.  Great job Christine!  You completely fooled him and we enjoyed ourselves very much 😉

As we were standing around admiring the cake, I was quick to brag about Lex to whoever we were chatting with.  I told them about the Rubiks cube cake she made for Dave and then Blackberry Messaged her to ask her to send me a picture so I could show them! lol

I counted it all up and I estimated that my day was around 43 POINTS in total!  Wooweee eh!  The amazing part about that is that I’m still  absolutely within my POINTS and I can hardly believe that there are still a few Flex and Activity POINTS to spare for the next few days!  It seems hard to believe, but this is why I love Weight Watchers!  Even when I strayed away from the plan for a long time, I always recommended it to anyone who asked because it is such a realistic program for life!

No guilt!  Guilt = the enemy and can lead you into a downward spiral and I spent a long time ridding myself of feeling badly for living life and especially when it falls within my rights on the plan.

So since I started showing you guys my journal, I think I have a few days of catching up to do: 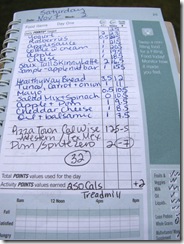 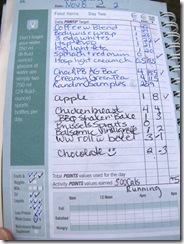 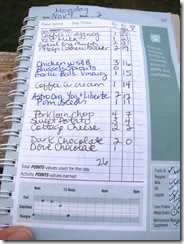 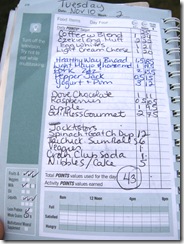 Today’s agenda includes a longer run outside (one lap includes the pup), laundry, cleaning and cooking. I’m reeeeeallly looking forward to the run.  I had to miss out on Monday night’s Fitkick because I had a hair appointment and last night’s workout was replaced by well, you see here! lol  Today I’m all rarin’ to work up a sweat and train more for our race.

So I have a question for yas.  Do you find that you feel “guilt” when you think you have “over indulged” even though you know that you’re still within your plan to do it? I think it is a common feeling for most people who are on a quest to lose weight and I am interested in how it affects you mentally when you feel you have “over-indulged” and if it does, how long does it affect you? For the day? A week? Until your next WI?

I have gotten to the point on this journey where I can honestly say that I no longer feel that way because I accept the necessary balance that is required to feel satisfied for long term sustainability, but I’m tellin’ yas bloggies, it took a loooooong time getting here!  It was ALOT of work!