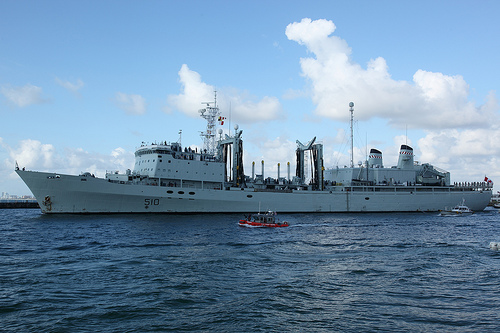 HMCS Preserver is currently the largest ship in the Canadian naval fleet and now CBC News reports that a board of inquiry will be held to investigate a crash involving the vessel at a dry dock here in Halifax.

The incident took place on November 4 as the ship was returning to dock after running some training maneuvers in Halifax Harbour. As it was it was turning around it crashed into a floating dock, damaging its bow. No one was injured in the collision.

The article goes on to explain that military inquiries are generally reserved for the most extreme of incidents, such as the death of a soldier. Officials have said that the inquiry will be not be open to media or the public. HMCS Preserver has remained in dock since the events took place.

Read the full article here and tell us what you think Haligonia: http://www.cbc.ca/news/canada/nova-scotia/story/2011/11/30/ns-preserver-inquiry.html

Do you think the crash warrants a full inquiry?

Military Inquiry Into HMCS Preserver Crash To Be Held In Halifax
https://haligonia.ca/military-inquiry-into-hmcs-preserver-crash-to-be-held-in-halifax-49771/