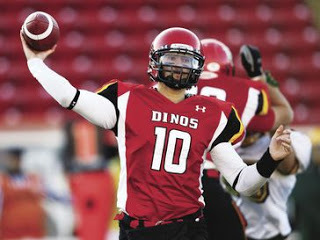 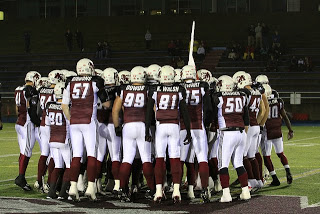 The Huskies will be out for revenge against their newest arch rivals, Eric Glavic and the Dinos
by Armaan Ahluwalia
Its finally here, the Mitchell bowl is this Saturday and we have one great match up ready to go.

The St. Mary’s Huskies will travel to McMahon stadium to take on the Canada West champions, the Calgary Dino’s.

Both teams know each other fairly well as they met last year in a game which the Dino’s easily took.

This year’s teams are not that different as both teams have many returning starters from last year. The Calgary Dino’s starting quarterback Eric Glavic knows this team very well as before becoming a Dino he was a Husky. Now Calgary head coach Blake Nill recruited Glavic to come play for him as his pivot out west. Glavic has had success out in West as Calgary almost won the Vanier Cup last year but came up short in the final part of the game.

Saying that this Huskies team has faced a lot of obstacles this year would be an understatement. Starting the year 0-3, losing their starting quarterback, starting Micah Brown who had never played a Canadian football game the list of problems goes on. With saying that they had their fare share of problems, head coach Steve Sumarah rallied his team and has gone with 6 straight wins heading into Saturday’s matchup.

The Huskies will also have AUS all-star receiver and punt returner Jahmeek Taylor back in the line up. Taylor will be coming back from a one game disciplinary suspension for which the team has not spoken much about. In the AUS championship final game Ahmed Borhot took charge of that team and had a spectacular game showing that they have another solid receiver on the team.

This game will be heavily ridden on how the St. Mary’s defence performs. The Huskies are used to playing in the AUS where the average sizes of the offensive lineman are not as large as out west.

This matchup will be the key to the game, because if the Huskies can’t get past the bulky Dino’s offensive line they will not be able to stop that 3 back system that the Dino’s posses with Walter, Lumbala, and Woodson. Not to mention they have a Hec Creighton winner as their quarterback in Eric Glavic. With all these factors in favour of the Dino’s the Huskies will have to buckle down and slow down the run, but they may have to pick their poison with the run or the pass.

On the other side of the ball the Huskies will rely on Micah Brown who is getting better with each snap he takes. In his last game against a weaker Acadia team he managed to throw well and not make silly turnovers. This will be important as the Huskies will need to control the clock and not give the ball back to the Dino’s and Glavic. The Huskies need to come out and establish a running game and mange the clock if they are to have any chance against the bigger Dino’s.

Saturday’s game will be one of intensity as both coaches’ are very intense when it comes to big time games. It will be interesting to see how St. Mary’s will match up against a just as big team in the Calgary Dino’s. With all of their fire power I like the Calgary Dino’s in this one by a score of 36-25 over the St. Mary’s Huskies

The game will be aired live on TSN on saturday. Check tsn.ca for times.

Armaan Ahluwalia is a writer for the Dal Gazette. Follow Armaan on twitter @therealbrindian and check out his blog, www.1inthestands.wordpress.com.