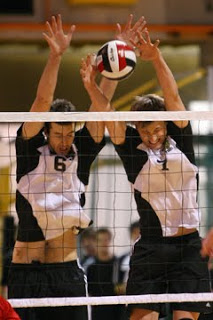 The Dalhousie Tigers Men’s Volleyball and Women’s Basketball teams played their exhibition home openers of the 2009/10 season last week at the Dalplex in Halifax.
The Men’s Tigers looked like the team that has dominated the AUS Volleyball Conference for over two decades. The Women’s Tigers looked like a shell of the team that came 1 win away from a conference championship last season.
Men’s Volleyball- AUS champs split with powerhouse Thunderbirds
The Tigers welcomed Canwest powerhouse UBC Thunderbirds to Dalplex for a 2 match set of exhibition volleyball.
On opening night, the Tigers swept the T-Birds 25-23, 25-19, 25-18, in front of a very loud and enthusiastic crowd.
In what has become a familiar sight for the fans at Dalplex, the Tigers were led by their dynamic duo of CIS all stars, Sander Ratsep and Max Burt. Reigning AUS MVP Ratsep picked up where he left off last season. Playing alongside AUS First team all star, Burt, the two delivered multiple kills and aces to pace the Tigers attack.
Burt was especially tough on the serve and with kills at the middle of the net. Danielle You provided a presence in the middle en route to garnering player of the game honours, and Devon Parkinson was a force on the outside.
The following night the Thunderbirds came out focused and ready to make amends while the Tigers opened up the bench and didn’t seem to play with the same intensity as the night before.
Sloppy service and poor timing at the net cost the Tigers the first two sets, as UBC played aggressive, in- system volleyball. The Tigers rebounded taking the third set but could not hold off the hard charging T-Birds, losing the final set 25-17.
Despite the loss, the Tigers are looking tough. They seem focused on winning their 24th straight AUS championship and building on their national success. Last year Dalhousie finished 5th at CIS playoffs, and ranked as high as #3 during the season.
The team will be without the services of graduating CIS all star Dan Murray, but they return 11 players from last year’s squad. Coach Carry MacLean, father of the Tiger’s Libero, Travis, said on Thursday’ s ssncanada broadcast that losing Murray will be significant for Dalhousie. However, he also said that this is the season many of the players have been looking forward to. The team thinks this is the year they win it all.
The status of Erik Montgomery will be an issue for the Tigers in the early going. Montgomery played his first game on Thursday after recovering from a late season injury in March. Physically, he looked pretty healthy, but his timing was way off, and the 5th year senior was mentally shaken as the match wore on.
Daniel You looked solid in Wednesday’s night game and may be able to bridge the gap in the middle until Montgomery regains his timing and confidence.
Regardless, with Ratsep and Burt leading the way, there is no reason to believe that Dan Ota’s Tigers won’t be in the chase for a national championship.
Women’s Basketball- Tigers Sloppy in Loss to visiting Carleton.
Maybe the Tigers had their thanksgiving turkey on Sunday morning?
Whatever the cause of the Tiger’s Performance, certainly rookie Head Coach Anna Stammburger did not envision this outcome in her first game at Dalplex.
It wasn’t pretty.
Carleton led from start to finish, slowly but surely pulling away in the second half, defeating Dalhousie 58-48, on a beautiful Sunday afternoon in Halifax. ( http://www.ssncanada.ca/game/599/ )
The Tigers came out looking sleepy and disinterested in the first quarter, while the Ravens were focused and full of grit, trying to avoid being swept by a trio of AUS teams on their tour of Nova Scotia. Carleton lost to Acadia and SMU in the days leading up to their matinee with the Tigers.
Kendall MacLeod was a huge spark off the bench for Carleton, and 5th year senior Ines Jellick (pronounced Enos Yellick) was a force down low. The Ravens looked like they were in mid season form on the offensive end, and received solid, steady play from their backcourt, led by Alyson Bush.
The Tigers received zero contribution from Leah Girdwood; the fifth year post player was in foul trouble from the get go. Her twin sister, Laurie, gave it her best shot, but triple teams in the post and a flurry of questionable offensive fouls kept her limited and frustrated before she eventually fouled out in the 4th quarter.
The Tigers lost a trio of stellar guards from last season in Kelly Donald, Jenna Kaye, and Brianna Orr. Rachel Legge is expected to pick up a lot of slack but she was scratched for this game, leaving the backcourt in the hands of key returnee Rachel Harrison, and the athletic combination of local recruits, Patricia McNeil, and Anna Von Maltzahn.
While Mcneil and Von Maltzahn were dynamic at times, their lack of experience and conditioning showed, as both players logged heavy minutes and faltered down the stretch.
McNeil was named player of the game for the Tigers.
The Tigers showed a different look then previous years. The Girdwood sisters and post Player Caitlin Crosby were very active setting ball screens and rolling to the basket. It was also clearly evident that Stammburger likes the penetration and kick game with her guards.
Von Maltzahn and Mcneil definietely bring a new look to the Tigers backcourt with their length and athleticism, while key 3rd year player Brooke Sullivan is looking tough on the defensive boards and could become a three point gunner on the offensive end.
We’ll know more about the women’s basketball team after this weekend. The Tigers host the annual Subway tournament as Dalplex featuring AUS and Ontario schools. The Tigers play the Brock Badgers on Sunday, a game that can be seen on ssncanada.ca. Tip time is 1:00.

Spoke with SMU women’s bball Head Coach Scott Munro. Big time local recruit Justine Colley is making an impact already. The first year haligonian was sought after by schools across Canada and the USA, but decided to stay home and play for the Huskies. Colley has averaged over 20 points a game so far in exhibition play……Carla Norrad, 2nd year from Sussex, was solid in the backcourt for the Tigers…..Von Maltzahn and Mcneil look strikingly similar. Both rookies are about 5’10”, long, and athletic. The combo should bring some much needed athleticism to a Tigers team that could have used it last year when trying to match up with Kelsey Hodgson of Cape Breton in the AUS final…..Triple Header Tigers action this weekend on ssncanada.ca! Men’s hockey vs. SMU, Friday night at 7:00; Women’s hockey Saturday night at 7:00 vs.STU; Women’s basketball Sunday afternoon at 1:00 vs. the Brock Badgers. Check out all the games on ssncanada.ca!