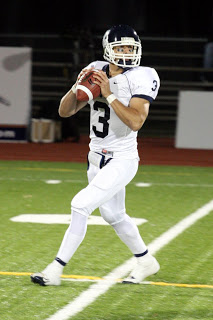 Heading into week 6 of the AUS Conference football season and it would appear that one unwanted storyline for AUS officials has become all too real and apparent to all interested fans and observers.
The Saint Francis Xavier X-Men and Saint Mary’s Huskies are really good; The Acadia Axemen and Mount Allison Mounties are really not.
As the conference heads into the middle weeks of a pivotal season in which it pursues an extension on an interlock contract with the QUFL, it was hoped by all involved that the AUS would be able to show strength from top to bottom.
However, as the teams prepare for its second and final week of games vs. teams from the high powered Quebec conference, the division between the top 2 teams and bottom 2 teams is as wide as a 25 yard end zone.
While the X-Men and Huskies are expected to beat Bishops and Mcgill respectively, the Mount Allison Mounties may lose 105-0 at powerhouse Laval, just as they did several years ago in Huskies Stadium vs. SMU.
The critical game could be Concordia at Acadia. Concordia is down this year, but Acadia doesn’t appear to be much better than last year’s 1-7 effort. Regardless, if Acadia can beat the Stingers in Wolfville, the AUS would be able to boast a 5-3 record vs. Quebec for 2008.
This could go a long way in proving to Quebec during negotiations that the AUS can hang tough with the mighty conference, and help the Atlantic schools secure another few years of interlock play.
Of course, if schools like UNB, UPEI, and Dalhousie would just working towards putting football programs on their respective campuses, this whole interlock business wouldn’t be such dire straits for the AUS.
Finally, I’ve heard from several sources that a guaranteed annual SMU/Laval game is on the table in the current negotiations. I’ve talked about this many times with many different people on both my shows. An annual Huskies/Rouge Et Or game would be a huge asset for both conferences. You’re talking about the 2 best teams in the country over the past decade, and a huge rivalry which both schools and their coaches embrace. The fact that this wasn’t pushed through years ago is puzzling at best.
Here are your AUS Power Rankings heading into week 6. They are unchanged from the rankings produced after week 2.
1. Saint Francis Xavier X-Men– Three weeks ago I was hesitant to pick the X-Men at #1, citing their average performance at Mt.A in week 2, and the common belief among AUS pundits that they benefitted playing at home in week 1 vs. a cocky, and unprepared Huskies team.
This just in; the X-Men are good.
Since week 2 they have made the long trip to Montreal and beat a game Concordia team 19-17, then they pummelled Acadia in a home and home set, outscoring the Axemen 81-17.
The X-Men have outscored opponents 2-1 and fifth year QB Steve Snyder is on pace to be AUS MVP.
The defence has given up a lot of first downs, more than the X-Men have gained (101-91), but this bend but don’t break mentality has surrendered an average of only 13 points a game.
The X-Men are gaining the respect of coaches across the country, locked in at the #6 spot in the national rankings.
With lame duck Bishops coming into Antigonish this Saturday, the X-Men should enter next week’s pivotal showdown with SMU with a perfect record of 6-0. Note- This weekend’s matchup with Bishops will be the first ever CIS football game to feature two black head coaches; Gary Waterman of X, and Leroy Blugh of Bishops.

2. Saint Mary’s Huskies– Talk to anyone at the Tower and they’ll tell you the Huskies are the best team in the AUS. The team still laments its no-show performance the first week at ST FX, having since run off 4 straight wins, most coming in convincing fashion.
But until they beat the X-Men face to face, the Huskies will have to settle for #2.
The Huskies travel to Montreal to play mediocre Mcgill, one week before the highly anticipated match up with ST FX at Huskies Stadium on October 23rd.
It may be the biggest “trap” game in the country this weekend.
The Huskies have shown a penchant for not showing up to games “ready to play”, a fact that has not been overlooked by Head Coach Steve Sumarrah.
Two weeks ago at home vs MTA, Sumarah was over yelling “too many mistakes” at his offence after they scored on the Mounties 70 seconds into the 1st quarter.
It would not be a surprise to anyone if the Huskies take the field at Molson Stadium in downtown Montreal with one eye looking towards the X game. The Redbirds are certainly not in the same class as QUFL powerhouses Laval or Montreal, but they’re no pushovers, especially on their home turf.
The Huskies have definitely rediscovered their swagger. The brothers Jones (Tristan and Devon), and Craig Leger have created a daunting three headed running attack, while QB Jack Creighton is getting better each week, throwing to a quintet of talented receivers in Carl Hardwick, Joe Doherty, Aaron Racioppa, Jahmeek Murray, and Firass El Fatah. Throw in the best placekicker in the country, Justin Palardy, about to break an AUS record for field goals, and you have a team that can put up a lot of points.
Everyone just hopes the Huskies don’t blow it in Montreal, so that we can have our big game next week at Huskies Stadium.

3. Acadia Axemen– Ranking a team as bad as Acadia is only justified by the fact that Mount Allison is that much worse. The demise of the Axemen under Jeff Cummins has people in Wolfville scratching their heads.
Dips and down-years are to be expected at any school. Injuries, bad recruiting classes, bad chemistry; a lot of things can cause a great football coach to have a bad season.
People forget that Blake Nill went 4-4 his last season at Saint Mary’s.
But Acadia is now three seasons removed from their last AUS championship, and the team has gone 5-16 since its blowout loss at Laval in the 2006 CIS Semi Final.
So what’s happened? Well, it would appear that the talent well has run dry.
The Axemen have surrendered 420 yards a game on defence. Worse, since trouncing MTA 58-15 in their season opener, the Axemen have been outscored 153-40. With the Mounties being so awful, it’s a safe bet the Axemen will play a playoff game on the road at X or SMU. But after the whistle blows on that fateful day and the Axemen head back to the valley to lick their wounds, a long off season of student and alumni discontent could surround the Acadia program and Head Coach Cummins.

4. Mount Allison Mounties– Ah, the Mounties. I’ve seen these kids play from the sidelines and it’s not for lack of trying. They work hard, they are well coached, and they stick together; but they are a bad football team.
The Quarterback, Jake Hotchkiss, is a gamer, but his arm strength is limited. The running back, Matt Pickett, is tough as nails, but undersized and lacks quickness. Their special teams are below average to put it kindly, and the defence is way overmatched.
The one shining light on this team is Gary Ross. The 4th year senior managed to garner Special Teams player of the week in the AUS for his performance vs. SMU, a 35-7 drubbing in which the all world wide receiver tallied nearly 300 all purpose yards.
The Mounties game at Laval this weekend will not be pretty, and it will be a long trip home from Quebec City. However, there is good news on the horizon; Acadia comes to Sackville the next weekend.

Do you have any thoughts, arguments, or criticisms on these power rankings? Please email me at ckdusports@gmail.com. Would love to have your feedback and begin a discussion on the AUS football season! Thanks for reading.