Last night’s episode of Modern Family saw most of our characters doing their own things, but for the most part it worked. I’m so used to seeing Phil interact mostly with Luke or Claire, that seeing him spend a lot of time with Haley was a fresh burst of comedy. 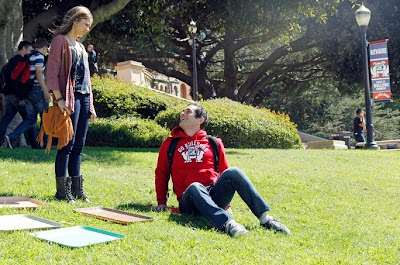 The best storyline, by far, was Phil taking Haley to visit his alma mater. I like that the show has subtly let Haley grow up over the past three seasons. She now plans on actually going to college, and the Haley Dunphy of season one wouldn’t have thought twice before dumping her dad to go to a party with the cool kids. She also wouldn’t have been OK sitting in a pub with her dad with buffalo wing sauce all over her face. (And now I’m really craving buffalo wings…)

When Haley finally did get mad at her dad for embarrassing her, it was with good reason. When Phil found out that the party he told Haley to go to was at a fraternity, he freaked out. At first I thought maybe Phil was holding some longstanding grudge against that particular frat house, but he was just being an incredibly sweet and overprotective father. He showed up and freaked out when he saw Haley talking to a boy with a plastic cup in her hand. It turns out that Haley was simply enjoying a glass of ginger ale and talking to a high school classmate while his parents looked on, not getting roofied – oops. Haley couldn’t stay mad, though, because she knew Phil was only worried about what will happen when she goes off to college. They ended with a nice little bonding moment of sliding down a hill on cafeteria trays.

Gone With The Men

Meanwhile, having her husband and all three kids out of the house meant that Claire was ready to enjoy a night out on the town with Mitch, Cam and their friends. She had to lie to escape watching Gone With The Wind and drinking wine with the snotty moms at Luke’s sleepover, but a girl’s gotta do what a girl’s gotta do. 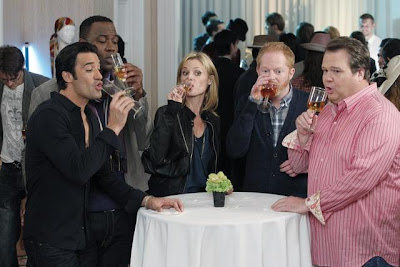 Unfortunately for Claire, it turns out that Mitch and Cam have mellowed a bit too much with parenthood. They’re old now. They had abandoned Claire by 9:30, and she was left partying with their hot gay friend…who turned out to be straight. This is huge – as any girl with male gay friends can attest to, you act much differently in front of your gay friends than you would around a hot single straight dude. Like, you would not try on a dress in front of the latter, or compliment his muscles or go dancing alone with him. The best thing about this storyline was that it didn’t go a predictable route. Claire didn’t discover her companion’s sexual orientation when he made a pass at her, it didn’t cause any problems with Phil. Instead it humiliated her in front of the snotty moms. Not only was she busted for lying about feeling sick, but she was caught in a too-short dress with a straight, single man in front of them. Ouch.

I didn’t love where Mitch and Cam’s storyline went after they left Claire and their friends. I wanted them to explore the realization that they’ve become kind of stuck in a rut, and at first it seemed like that’s what they were doing. They accidentally drive the wrong Prius home from the party, and based on the evidence inside the car it belonged to people much cooler than them. They drove it back to the home it belonged to, and a crazy woman came out and bashed it up like they were Tiger Woods. I get what they were trying to do – the guy who owned the car had a crazy, awful life while boring Mitch and Cam have each other and their love, blah blah blah. I felt like it skirted the issue that it’s important to take time for yourselves as a couple and as people, even once you have kids. Mitch and Cam have a vibrant group of friends and just because they’re more settled now doesn’t mean they can’t still have fun once in a while. The fact that Claire’s night turned out so disastrously as well kind of suggested that parents, or old people, or whoever, can’t really have fun. (But maybe I’m over-analyzing.)

The third storyline, at the Pritchett/Delgado household, was solid and funny. When Manny received a mysterious delivery at the house and spent a lot of time alone in his room, Gloria worried what he might be doing. And then she worried even more when Jay suggested what he was probably doing…

I liked that this storyline hinted at how Gloria will struggle with her changing relationship to Manny as he gets older. He’s not a little boy anymore, no matter how much she might wish he was. Luckily, he has Jay to talk to as well. What Manny had actually ordered was not porn, but some ridiculous contraption to hang himself upside-down so he could stretch himself taller. Poor Manny. It was a nice little moment when Jay told him that at his age, he worked out to try and attract the ladies – and they could start doing that together. And adding frequent doses of comedy into the whole storyline was Jay’s newfound obsession with a Spanish soap opera Gloria had asked him to watch. You had to laugh when he was on the phone with the housekeeper talking about what had happened.

What did you guys think of the episode? Personally, I liked it a lot. Now, check out some of my other favorite moments and quotes from “Go Bullfrogs!”: