Well, at least something was new last night. (Survivor and ANTM were both recap shows.) I was kind of hoping for a big Modern Family Thanksgiving get-together, so for me last night’s episode was a tad disappointing. That doesn’t mean it wasn’t funny, though. It was hilarious. 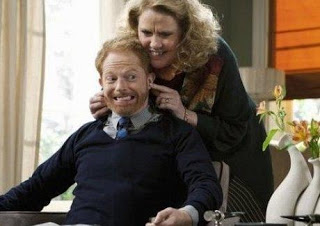 My favorite storyline of the night was Mitch and Cam’s, which it is more often than not. Cam’s mom was visiting, whom he loves very very deeply. Mitch, on the other hand? Not so much. He found Mama Tucker to be a little too handsy and with no sense of personal boundaries. I could really relate to Micth’s situation because I’m so not a touchy-feely person either. He didn’t want to hurt Cam’s feelings, so instead he tried to get Cam to actually witness some of the inappropriate touching. Instead, Cam witnessed Mitch sticking his butt out and begging Mama Tucker to massage it with her magic hands. Oops.
Mitch had to confess the whole thing to Cam, and Cam tearfully asked Mitch to show him where his mother had touched him using Lily’s doll. That was maybe one of the funniest things I’ve ever seen. Ever. Then Cam’s mom overheard Mitch saying that all the touching creeps him out, so that was sad. She promised to change, but did so while Mitch was naked, in the bath tub. And then she dropped her bracelet in the tub and reached in for it. And then Cam took a picture. Some families are just different, you know? 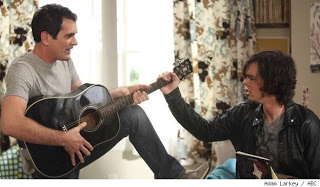 Meanwhile, Claire encouraged Haley to dump Dylan after she saw her making out with the cute tutor. Of course Claire would encourage Haley to be with the smart, good-looking tutor, but Phil took the whole breakup pretty hard. I’ll admit, I haven’t been the biggest Dylan fan (his best moment was when he performed a scandalous song for the whole family) but the entire sequence of events where he and Phil became BFF and Haley thought it meant Dylan had a new girlfriend was hilarious.
Jay and Gloria had a pretty amusing storyline this week too. Jay complained of stomach pain for a couple days while Manny checked the symptoms on WebMD and Gloria mocked him for being such a baby. When Jay finally went to the hospital it turned out it was his appendix and he needed surgery. It was a simple storyline, but watching Gloria go from mocking Jay for being weak to feeling awful for being such a terrible wife was hilarious. It reminded me a little of the episode where Claire dresses up for the firemen when Phil got sick. Gloria is such an over-the-top character, so watching her grab onto Jay’s hospital bed and wail that he had to forgive her in case he died was very true to her.
The episode was a funny one, even though I’d really been hoping for everyone to join together for some tandoori turkey or something. Here are my favorite lines and moments from the show, and be sure to share yours!