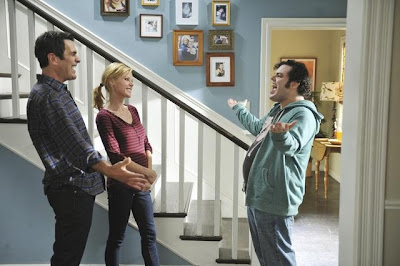 I’m totally a Pritchett. OK OK, I might have a little bit of “dreamer” in me, but I totally would have been Team “Punkin Chunkin” Is Fake if I were part of the Modern Family gang.

The episode started off a little slow, but I liked how the themes came together when the family united at Casa Dunphy for Thanksgiving dinner. Phil was reunited with a weird neighborhood boy named Kenneth who’d idolized him as a kid. It turned out he’d become a bajillionaire just by asking himself WWPDD? (What Would Phil Dunphy Do?) Meanwhile, Jay and Gloria disagreed over whether to be honest with Manny and tell him his Thanksgiving centerpiece was a piece of crap, or coddle him and tell him everything he does is great. I was definitely on Jay’s side there. And when Cam’s story about launching a pumpkin across a football field only to have it go through the open sunroof of a car didn’t land so well at a social outing, Mitch revealed that he’d always thought the story wasn’t, well, you know, true.

Things came together when the families gathered in the kitchen and Phil realized that the reason he hadn’t also made boatloads of money was because while Kenneth was making decisions that Phil would, Phil wasn’t – every time he had a good idea, Claire squashed it. The very thing Jay wanted to do to Manny! And the very thing Mitch constantly does to Cam! That’s because there are Pritchett’s – Jay, Claire, Mitch and (hilariously) Alex – and there are dreamers – Phil, Cameron, Gloria, Haley, Luke and Manny.

It all led to the whole family abandoning Thanksgiving dinner (it’s always better as leftovers anyway) to head out to a football field and see if they really could launch a pumpkin the whole length of it. It was a Pritchett vs. Dreamers showdown, but when the Pritchetts were proved right success didn’t taste so sweet. Instead, the family went down the block robbing homes of their pumpkins so they could try the experiment again and again, hoping to eventually prove Cam right.

One storyline that I felt was a bit lacking was Haley and Alex’s. They dented the minivan while out driving, and Alex herself was vaguely responsible because she’d distracted her sister with a picture on a cellphone. Alex wanted to immediately fess up to Claire, but Haley believed they could hide it long enough for Claire to go out somewhere, thus allowing them to blame the dent on some inconsiderate fellow shopper. Sure, the storyline further highlighted the Pritchett vs. Dreamer differences, but we already knew the sisters were completely unalike. The payoff was funny though, I’ll give it that – Alex broke down and confessed only seconds before the family really did launch the pumpkin across the football field, hitting the van in the exact spot the dent was located. Whoops!

Overall it wasn’t my favorite episode of all time, but I do like it when the inherent differences between the couples are highlighted. There were a lot of good jokes, too, some of which I’ve listed below. Check ’em out and let me know what you thought of “Punkin Chunkin”.