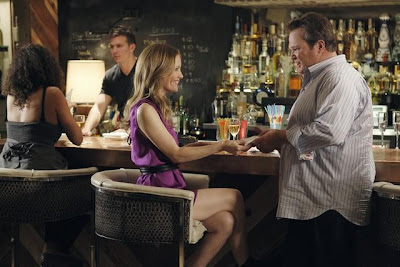 Not like that! I mean there are benefits to having friends, as we all learned in last night’s hilarious episode of Modern Family. While this show may be a little more hit and miss lately than it was in its incredibly strong first season, it still manages to deliver great episodes like this one. There were several storylines last night, none of them really intersected, and they all totally worked.

After having dinner with Jay’s friend Shorty and his new girlfriend (played by Jennifer Tilly and her intense cleavage), Gloria wanted to join them for salsa dancing the following night. Unfortunately, Jay was more in the mood for chips, salsa and a pay-per-view boxing match. Romantic! It turned out that he mostly didn’t want to join Gloria and his friends because he can’t really dance.

Luckily, Jay got some help from his stepson and his son. Manny gave him a few tips on salsa dancing, and Mitchell gave him a helpful little pill that, you know, just helps you loosen up at the club. I was expecting it to be Xanax or something, but I laughed even harder when I found out that it was chewable baby aspirin. The way Jay acted at the salsa club, like he was high, was a great payoff for the joke.

Meanwhile, when Mitch and Cam had been out at a bar with a friend, they made a bet with Cam that he wouldn’t be able to score an attractive lady’s digits. Apparently Cam thinks that he’s not only able to pass as straight, but that if he were straight he’d be a perfect match for Julia Roberts. He passed her a bottle of water at an AIDS walk once and her hand lingered…because he wouldn’t let go. So Cam went to hit on a girl at the bar, who happened to be none other than the hilarious and charming Leslie Mann. I love Leslie Mann so much that I kind of wish her character could be recurring on the show.

She quickly gave Cam her phone number, but he felt so bad the next day that he was compelled to call and break the news to her that he’s gay. As it turns out, she already knew. Like every other girl in the world, she just wanted a gay friend. (Never underestimate the power of a gay friend. No one else will compliment your makeup application the same way.)

Cam had been so desperate to prove to Mitch that he’s a chick-magnet though, that Leslie Mann played along with it in front of Mitch and even planted a big, long kiss on him. Mitch’s face was hilarious. But seriously, folks, can Leslie Mann return every once in a while now as Cam’s new BFF?

Since Modern Family is now going with a “Haley is going to college” storyline, this week we saw her struggle to complete a college essay. I completely knew where she was coming from on this – colleges always want to hear about how you’ve overcome obstacles, which is just cruel punishment for those of us who’ve managed to live strife-free. What’s Haley supposed to write?

Dear College,
The obstacle I’ve had to overcome is my shockingly low IQ and unfortunate ditziness. I’m a flake, but I’d still really like to attend your school. Just writing this essay was a huge challenge for me, but I managed to overcome it.
xoxo,
Haley Dunphy

Obviously not. And frankly, Claire’s tactics didn’t work either – she drove Haley out to the middle of nowhere and abandoned her so she’d have to walk home. What? What was that? Sure, it’s an obstacle, but it’s not one you write a college essay about. Couldn’t they have just let Haley believe she has ADD?

While Claire was being a psychotic mom to “help” Haley get into college, Phil was building a treehouse with Luke. But Luke knew this was a dangerous task (has Phil even fixed that step inside the house yet?) and bailed before it was over. The treehouse reminded Phil of how great it used to be hanging out with the neighborhood kids, and how he doesn’t really have friendships like that anymore. There are college friends scattered over the country, and work friends and couples friends, but no dudes just to hang out with. And that’s when he met his new neighbor, who has lived next door to him for eight years.

The closing confessional where Phil talked about his cool new friend was hilarious, and ended the episode with a smile on my face. And how could it not, with such a strong episode? Here’s what else I loved from “Treehouse”: