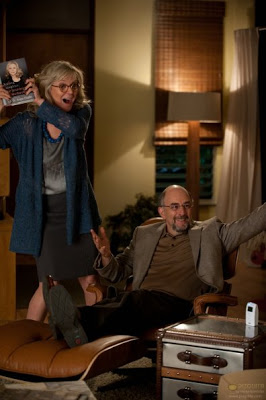 Since I’m no longer reviewing (but still absentmindedly watching, like while I do the dishes or read a magazine) 2 Broke Girls and was kind of disappointed in New Girl this week, it was nice to see a strong showing from the other new sitcom I started watching this fall – Up All Night. I thought this week’s episode had a strong A and B storyline, and a lot of funny moments that really worked.

Reagan’s parents came to town, and despite her best efforts to avoid them, Chris invited them to stay. Reagan’s mom was particularly troublesome, some kind of well-known psychologist/author played hilariously by Blythe Danner. She was actually a lot like Ava, but more condescending since she’s Reagan’s mom.

After hearing Amy make a similarly exasperated noise to the one Reagan herself makes, Reagan started to worry that her tense relationship with her own mom would set a bad example for her future relationship with Amy. So she decided to put some effort into cultivating a better relationship with her mom, in the hopes that one day Amy will “treasure” her as well. That didn’t go as planned since, well, Reagan’s mom is kind of obnoxious, but the end result where Reagan overheard her mom getting up to soothe a crying Amy in the middle of the night was incredibly sweet.

In another funny little subplot, Chris took one of those ridiculous online quizzes that spit out the alleged date of your death and learned he only had about twenty years left to live. Turns out that also coincided with the year his lifetime subscription to Sports Illustrated would run out. He somewhat bonded with Amy’s dad while she was on a girls’ night out with her mom. Chris was great in this episode since he was simultaneously trying to relieve the tension in the house during Reagan’s parents’ visit and panicking about his impending death.

Meanwhile, the fact that Ava knows almost no one who works for her was highlighted when Dale the sound guy died. Maya Rudolph’s been doing a great job of making Ava incredibly self-absorbed without making her entirely unlikable either. I’m not even really sure how she’s managing to do that. It was funny to watch the whole crew stew in their hurt feelings, and Ava’s final tribute to Dale was possibly the funniest thing she’s done on the show so far.

After a short hiatus, I was really glad to have Up All Night back. It’s doing a good job of holding onto my Best New Show of Fall 2011 spot. Here are some other quotes and moments from “Parents” that I really liked:

Up All Night: Mama Drama
https://haligonia.ca/up-all-night-mama-drama-47779/