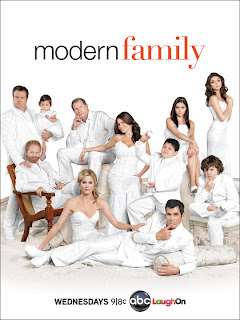 Doesn’t anyone do a Christmas episode anymore?
OK, there was Glee on Tuesday night. And The Office has an hour-long Christmas special on tonight that I’m very much looking forward to. And even though How I Met Your Mother and The Big Bang Theory will still have new episode next week, the episode synopsises (Synopseees? Synopsisis? Anyone?) do not suggest they’ll be particularly festive. Plus many of my favorite shows like Parenthood, Chuck and Friday Night Lights have already wrapped up for 2010 without even so much as a string of garland on the set. So what gives?
The reason that I’m complaining is that I was looking forward to a Modern Family Christmas. Remember last year when Phil canceled Christmas because he thought one of the kids had been smoking? And Micthell and Cameron got a Santa fired and then invited them into their home? And they have fireworks! I wanted to see it. I deserve to see it.
OK. Rant over. All of that said, I actually really enjoyed last night’s episode. I just wish we were also getting a new one next week.
The episode centered around Luke and Manny’s first ever school dance, but it was really about competition between parents. Claire and Gloria battled to be the best volunteer mom on the dance committee, and Jay tried to teach Phil to man up while they took Luke and Manny to the mall. Both storylines worked, but the scenes with Jay and Phil were definitely my favorites.
Mall Men
Thank god Cam had loaned someone his teal pocket square, and that Luke’s suit looked like it was meant for a cabbage patch doll, because watching Phil and Jay clash at the mall was hilarious. The relationship between Jay and Phil, where Phil constantly seeks approval and Jay never gives it, is one of the best on the show. Remember when Phil tried to fix Jay’s printer? As much as Phil wants to be BFFs with Jay, it’s just not meant to be. 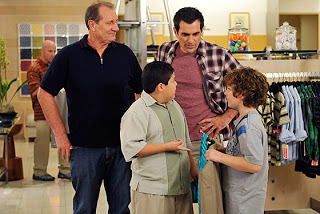 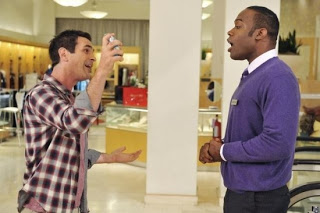 Phil took off to get away from Jay and was so distraught that he freaked out at a guy who prematurely spritzed him with free “Oasis for Men” cologne. To be fair, the guy did spray him in the face before Phil had even given the OK. But, you know, two or three sprays back into the salesman’s face should have evened things up. Not, like, forty.
Dance Revolution 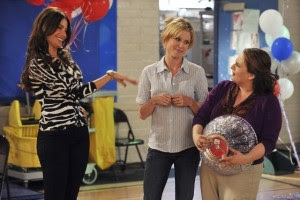 Meanwhile, Claire tried to exclude Gloria from volunteering at the school dance because she didn’t want her thunder stolen. I had a hard time sympathizing with Claire because she was so out of line, but it was pretty funny. My biggest issue with Claire was that she said the dance was “my only thing”, and that’s exactly what she said about Halloween. The competition between Claire and Gloria is getting a little old, and I wouldn’t mind seeing a new aspect of their relationship. That said, the fact that Claire had stuffed her bra for the dance was hilarious and was the perfect way to end the storyline.
Bite Me
Mitch and Cam’s little subplot this week was a disagreement over how to deal with a biting habit Lily had developed. I always like seeing Mitch and Cam deal with things like this, because they’re such defensive and unsure parents. Cam’s reluctance to do anything to punish Lily was just like his distress over letting her cry through the night, and it totally worked. I also loved how they blamed each other – Mitchell pointed out that
Cam lovingly bites Lily’s feet and Cam pointed out that Mitch uses his teeth “as a multi-tool”, like to open bottles of wine. In the end they sort of agreed to just let Lily be, which wasn’t the best ending, but watching the struggle between them was great.
What did you think of the episode? Are you disappointed we won’t be seeing a Modern Family holiday episode?
Check out my favorite lines and moments from the episode: