I’ve always said that Modern Family does well when characters get to interact in fresh ways, and I think last night’s episode “Egg Drop” was a good example of that. The episode was divided into the usual three separate storylines, but one little shift – Gloria taking Claire’s place at a seminar Phil was holding – changed everything. The result? Three funny, honest storylines.

Phil’s a partner in a new real estate firm, and that means drumming up some first time home-buyers as clients. So he held a seminar on the five keys to buying a house – simple, but not so simple that you don’t need a licensed professional to guide you through the process!

Phil had his whole routine down, from Haley’s job introducing him and turning on the confetti machine to Claire’s role as an audience member who asks “But isn’t there a sixth key”? Haley would throw him a large, shiny key and he’d say “Yes, they key to your new home!”

But when Gloria took over for Claire at the last minute, she and Haley decided to go to the spa before the seminar and ended up missing the whole thing. Poor Phil was running all over the place trying to do every job, and the seminar was a disaster. That would have been an OK storyline, but what made it great was the fact that Haley asked Gloria to take the fall for her because she knew Phil wouldn’t get mad at Gloria. He puts her on a pedestal, and I liked seeing he characters acknowledge that in a funny way – Gloria was literally standing on a pedestal because Phil was sweeping, and she yelled at him to get mad and scream at her because that’s what families do.

Meanwhile, Cam and Mitch were meeting with a prospective birth mother with the hopes that they’d get to adopt her baby. Things started out rough, since Mitch couldn’t help but correct every dumb thing the not-the-brightest-light-bulb lady had to say. She wanted her unborn child to visit all 52 states (road trip to East Dakota, anyone?), she was sure that a dolphin was a fish (it’s a mammal), she made them feng shui the apartment and since the baby daddy was a musician she wanted her child to grow up around music. Well, that they can do!

Mitch and Cam’s performance of “Don’t Go Breakin’ My Heart” was hilarious. Last week I complained that the show often relies too much on basic personality differences to create conflict, so it was nice to see Mitchell’s character get to loosen up and have fun. The problem was, Cam got jealous when Mitchell’s singing and jazz-hand abilities outshone his own talents, which Baby Mama described as “pitchy”. (Not a word! Curse you, American Idol!) Determined to prove himself, he serenaded Baby Mama (I forget her name, sorry) with “If You Leave Me Now” just as she had decided to let Mitch and Cam adopt her baby. Whoops! Soon the tears were flowing and she decided to keep the baby after all.

The funniest storyline of the episode for me was Claire and Jay’s – probably because I’m also extremely competitive and can easily see myself falling into this kind of trap. Luke and Manny were both working on a classic project for school – the egg drop. They had to design a contraption that would protect an egg from a one story fall. 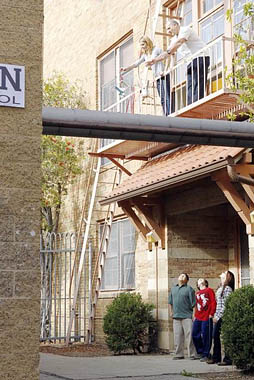 Manny slyly suggested to Jay that Claire was going to do Luke’s project for him, and Jay being Jay immediately called his daughter to say that he certainly wouldn’t help Manny with the project. Claire assumed that meant he was helping, and thus started interfering in Luke’s work – that’s why Gloria had to fill in for her at the seminar. Pretty soon, Jay and Claire had completely overtaken the project, which was Manny’s plan all along. The kid is sharp – remember the episode where he conned Jay into selling all his wrapping paper door-to-door? I like seeing this manipulative layer to Manny’s otherwise very genuine and romantic nature.

In the end, Manny ‘fessed up about his plan and the boys were told to redo their projects. There was a nice moment when Jay told Claire that her competitive nature and perseverance is what he loves most about her, but the best moment of all was when Alex finally revealed her far superior design and reminded them that they’re all just playing for second. Oh Alex Dunphy, never change.

Just out of curiosity, has neither Luke or Manny ever heard of Google? That egg drop project is so old, I’m sure there are tons of design suggestions floating around the Interwebs.

What did you guys think of “Egg Drop”? Check out a few more funny moments and quotes below and let me know if you have more to share!