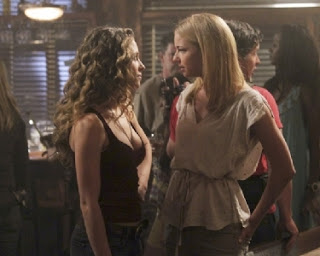 The plot thickens! Last night’s episode of Revenge was mighty juicy, what with Daniel’s less-than-ideal motives for proposing to Emily, Emily’s Cyrano de Bergerac tactics to guide “Amanda Clarke” through an interview with a corrupt author and the big revelation that Charlotte is very likely the product of Victoria’s affair with David Clarke.

So, just for clarification, that means that Emily has a half-sister who also happens to be half-sister to the guy she’s dating. Oh, and said half-sister is dating the brother of Emily’s childhood love, who is currently dating…well, you get it. It is a very tangled web.

“Infamy” focused on Emily getting some good ol’ fashioned revenge on Mason Treadwell, an author who’d not only betrayed her personally but was bribed by the Graysons into writing a bestselling book filled with lies about the scandal. Of course, it’s obvious that someone would write a book about the scandal. The reason to hate Mason Treadwell is that he knew David Clarke was innocent, and had pledged to a young Amanda Clarke that he’d help clear her father’s name. (Did anyone else kind of chuckle at the idea of young Amanda Clarke reading that book and crying? How old was she? Did she even understand it? Who gave her that book, anyway? Wasn’t she institutionalized? Where’d she get the lighter to burn a photo of her father? I digress…)

Emily sought her revenge on Treadwell via arson, setting fire to his home which also contained the only copy of his memoirs. That’s what ya get for being an arrogant hipster who uses a typewriter and thinks that having more than one copy compromises the integrity of the work. Also, that’s what you get for being an opportunistic piece of trash.

It was pretty easy to predict that Emily was planning to torch Treadwell’s house, but besides getting to draw a nice red X over his face it meant she could steal all the interview tapes from his book research, which is how the Charlotte bomb was dropped. Now, I know there are some viewers who may have seen this coming but it was still a juicy revelation to end the episode with.

And of course, we also have the ongoing drama of the Grayson divorce and what that means for Emily. It’s never been clear whether she truly cares for Daniel, or how much so. We’ve always known that Daniel and Emily get engaged because the show opens with their engagement party. But there are so many unanswered questions: Is it Daniel who gets shot? Who does the shooting? If it is Daniel, has he done anything reprehensible enough to deserve such an offing? So far, Emily has avoided actually ending lives. With the revelation that Daniel intends to marry Emily so that he can access his trust fund and combine his shares with Victoria’s to control the company, it means that Conrad Grayson may have a motive to off his own son. What I do know is that there are sure to be many plot twists and revelations before we return to the engagement party. God, I love the suspense on this show.

I also like how Ashley’s role is developing. She’s in way over her head with both the Graysons and Emily. She’ll do anything to impress Victoria Grayson and earn her spot as a socialite, but she doesn’t realize that Emily is completely aware of what’s going on. I wouldn’t mind seeing Ashley slowly step more and more into a villain’s role until she has to get a red X drawn across her pretty face as well.

There were several great moments with Nolan this week, too, from his time at the shooting range with Emily and Daniel to the way he sniffed a drink Emily served him before putting it down, untouched. I love the tentative friendship these two have – Emily trusts Nolan enough to confide many of her schemes to him, he trusts her enough to act as an accomplice when he doesn’t quite know what she’s up to…yet he wouldn’t put it past her to slip something into his drink. Can you blame him?

A couple of my fellow writers over at You Know You Love Fashion are dying to see Nolan and Emily hook up, but so far I don’t really see their relationship as anything more than a complicated, but platonic friendship. What do you guys think? Do you get a Logan Echolls/Veronica Mars vibe here? I think Nolan has a similar flair to Logan, but I don’t feel the heat.