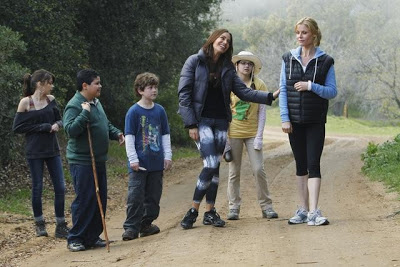 Modern Family has always had a knack for nailing the right combination of funny and touching, and last night’s Mother’s Day episode was no different. I loved all the different plots and how they came together in the end at the big family dinner.

Claire and Gloria decided to take the kids on a Mother’s Day hike, which was completely bizarre to me. Who would do this? Since when does Gloria like it outside? And who wants to spend actual time with their children on Mother’s Day? Honestly, I always thought the best gift you could give on Mother’s Day was some time alone. Or dinner. But I digress – they went on a hike, and all the kids did was bicker and complain.

Claire forcing the kids to sit in the park while she and Gloria completed the hike together was somewhat funny, but the hilarity came later. At the top of the mountain (that was a mountain, right?) Claire vented to Gloria about how she wanted to punch all three of her children, but Gloria wouldn’t partake. How could she say something bad about Manny? But eventually she got into it. Manny is persnickety, he trails around after her, he never goes outside to kick a ball around, and his poetry sucks. You bet he trails around after her – he’d followed her up the mountain and overheard the whole rant!

Manny throwing his running stick down in anger struck me as so funny. It was even funnier when Claire tried to mediate the argument by saying it was healthy for Gloria to open up about these things, and instead Gloria backtracked and said she’d lied about all her complaints just to make Claire feel better for wanting to hit her own children. Meanwhile, after Haley and Alex concluded that their mom was purposefully forcing them into situations where she could make them guilty, they decided that none of the three kids would apologize when she got back from the hike. I loved seeing Claire try to wheedle an apology out of Luke as his sisters looked on to make sure he didn’t deliver. 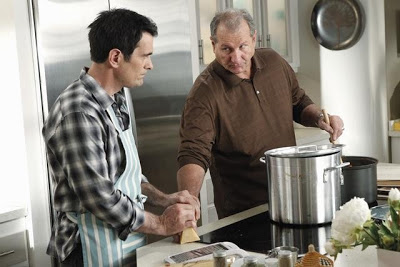 One of the best things about the hike was that it gave us a chance to see Phil and Jay interact. I love this relationship because they couldn’t be more different, and this storyline really highlighted that. Everything Phil does makes Jay uncomfortable or annoyed. His “onion goggles”, his Julia Child impression, singing into a spatula. It was like Jay was cooking dinner with Sandra Bullock in a romantic comedy. Jay teared up after Phil discovered something Jay had written for his mom – a recipe for the perfect mother! It’s one tablespoon of love, one cup of warmth,  175 pounds of tenderness and it serves one small boy. Phil, of course, reacted in the completely wrong way. Well, Phil responded with what he would want if he were crying – a hug. But for a guy like Jay, it’s better to just pretend that the tears are courtesy of the onions.

Meanwhile, Mitch and Cam’s storyline managed to make a somewhat sensitive topic really funny. What do two gay dads do on Mother’s Day? Well, according to Mitch you celebrate the more motherly of the two – and that would be Cam. I could understand why Cam felt so uncomfortable about being labeled the mom in the relationship. He’s a gay man, not a woman. But as Mitch tried to point out, Cam’s motherly qualities are what makes him such a good parent. Eric Stonestreet was hilarious throughout the episode, though. The look on his face when he had to pose for a photo with all the play group moms. Hitting an old man on a bicycle as he tried to prove his manliness by throwing a football. Ripping up Gloria’s Mother’s Day card because he thought Mitch had gotten it for him. It was hysterical.

Luckily, everyone made up after Jay broke down in tears at the table as he was telling everyone about his mom. It was a really sweet moment, but the show kept it funny by keeping the most sensitive character, Phil, out of the picture. When he walked in on everyone crying and hugging, I just cracked up. I laughed even more when I noticed that Mitch hadn’t joined in at all. He’s my favorite.

Now, check out my favorite quotes and moments, and tell me what you thought of “Mother’s Day”.