It’s official – I hate the Redemption Island twist on Survivor.

It was fun pre-merge, but now I’m totally over it. There are only two episodes of Survivor remaining, and there are nine people left in the game. Nine! We only started with eighteen, for goodness sakes! I read an interview with Jeff Probst where he said going into the finale, there will be eight people who have the opportunity to win the game. This is way too many. If my math is right, there will be four people in the actual game of Survivor and four people on Redemption Island when we all sit down with our chips and popcorn on the night of May 15th.

I will be disgusted if someone like Matt, Mike or Ralph ends up winning Survivor. I don’t think any of them have really played the game. Furthermore, I don’t think Matt is all he’s cracked up to be. Let’s talk about the duel.

Smash Brothers and Visits from Mothers

The four men on Redemption Island – Matt, Mike, Ralph and Steve – had to face off in a challenge to stay in the game. And three of them would be staying in the game! Sorry, but I just can’t get into the idea of a quad-ruel. It is not exciting to see someone stay in the game because they came in third freakin’ place. Out of four. That, my friends, is nothing to write home about.

Speaking of home, this was the week all the castaways got to see their loved ones! First, everyone – at real camp and on Redemption Island – got to watch some videos. We saw a few moms, some siblings, and Ralph’s…friend. As I told my mom, if I ever go on Survivor I don’t want some second-rate video. If she wants a cut of my million, she better be the one making it.

The videos came not a moment too soon for Natalie, who broke down in tears after Ometepe returned from Tribal Council. That’s right, she wasn’t celebrating her tribe’s victory over Zapatera. She wasn’t even crying at the idea that they’d now have to vote out one of their own. She was crying because she missed her mommy. OK, that’s mean. I’m being too hard on her. She’s a 19 year-old kid who’s been out there for thirty days, and she cried a whole lot less than Fabio did last season. I take back my eye-rolling – it’s not my fault, it’s just an automatic reaction I have. It’s like a tic! (Oh man, if only I’d thought to say my eye-rolling was due to Tourette’s in Junior High, I bet I would have gotten in a lot less trouble.) 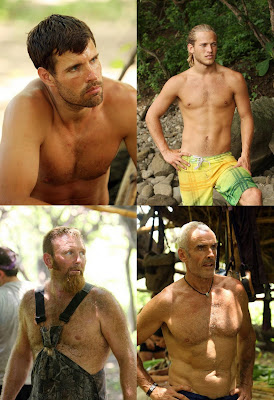 Everyone headed over to the Quad-ruel, where Probst made some awkward product placement comments about cell phones and then explained the challenge – each guy would throw a ball at tiles, and the first three guys to break all four tiles would stay in the game. The first guy to do it would win a reward – seeing his loved one!

Now, a word about Matt and how he’s overrated. Yes, the dude won a bunch of challenges on Redemption Island. Let’s talk about the people he beat in actual duels: Francesca, Russell, Kristina, Krista, Stephanie and Sarita. Do these sound like even matches? Maybe the Russell one, but the others? Weak sauce. I mean, it’s mildly impressive, yes. But it’s not like Matt’s been out there facing off against the likes of Grant or Boston Rob.

Now let’s look at Redemption Island 2.0. If you ask me, Mike has been schooling Matt. In the first “Truel”, Mike finished first, followed by Matt, and then David was eliminated. Matt finished first in the next “Truel”, but that was a game of Shuffleboard – hardly something to brag about. And this time, once again, Mike managed to finish first. Mike was four for four in smashing his tiles, and at this point I would guess that he has the best shot at returning from Redemption Island. Now if Grant shows up there next, I think he’d be pretty tough to beat.

Steve only broke one tile (This guy played football? Professionally?) and was sent packing, and then Mike’s mom was trotted out to celebrate his victory. She was followed by Matt and Ralph’s loved ones…and they were followed by all the loved ones. Mike had a decision to make – did he want to keep his visit with his mom, give it up so that Matt and Ralph could have visits, or give it up so the remaining six players could have visits? After talking about Jesus and stuff (Is this the most religious cast ever or what?) Mike decided to spread the love with the most people and give Rob and his goonies their family visits.

Religion aside, I don’t think it was a good move. If Mike makes it back into the game and into the final three, he likely won’t be getting votes from the Ometepe people, regardless of his decision with the family visits. No one is going to say “Well, my BFF Rob is sitting up there, but I’m going to give Mike a million bucks because he let me spend a few hours with my mom.” The only way someone from Redemption Island will get Ometepe votes is if the Ometepe jurors are too bitter about being voted off. Whether they vote for Mike or not, it will have little to do with the family visits.

Maybe he could have scored some jury love from Ralph and Matt by giving them time with their loved ones, but I think Mike would have their votes no matter what. And getting those visits could give Matt and Ralph the energy boost needed to beat Mike in the next challenge. I think he should have kept the visit for himself.

Watching the remaining six show their loved ones around camp was pretty funny. Natalie cried a lot, Phillip spoke like a normal human being, and Rob’s sister looked completely bored to death with all his strategy talk. I’m guessing she’s had it with reality TV?

The immunity challenge was epic. Really freakin’ epic. In scorching 110 degree heat, the six contestants had to untie boards and bring them up a massive flight of stairs one at a time, fitting them into place. You had to go in order, so if you brought up the wrong plank you had to drag it back down to the bottom and try again.

Ashley seemed like she was, to quote Randy Jackson, “in it to win it” at the beginning, but it quickly came down to a race between Rob, Grant and Andrea. Andrea needed to win it to survive, but Grant and Rob probably didn’t feel particularly safe either. At this point in the competition, they both could have big targets on their backs.

It was fascinating to see how the challenge played out. As soon as I saw it, I put my money on Grant for the win. He’s clearly the most physically fit player left. He has crazy stamina and has excelled in challenges. And by the looks of the players at the end of the challenge, that remains to be true. Had Grant not screwed up a couple times, he probably would have won. Not only did Rob not seem to bring any incorrect boards up the stairs, but he pushed himself to the limit. It was incredibly bad-ass.

Compare Matt to Jesus all you want, but Rob might as well have been lugging a cross up those stairs. He stumbled. I thought he might pass out and roll down the stairs. For a minute, I was seriously concerned that he’d pull a Russell Swann and get medically evacuated from the game, which would have been the worst moment in Survivor history. The guy literally crawled to the finish line and then collapsed.

Remember back in Heroes vs. Villains when Rob collapsed thanks to the flu, or as he called it, a case of crybaby-itis? Well, this was nothing like that. As Probst showed legitimate concern and offered to bring it medical for his man-crush, Boston Rob tried to shake it off with a “I’ll live dude, let’s go.” Riiiight, except that you can’t even stand up on your own, Rob. Seriously, though, it was an epic win.

Back at camp, Phillip was riling everyone up with his usual antics. But are these antics put on? Has this all been a ruse? Phillip thinks so, telling the camera that he’s been purposefully behaving in such an awful way that everyone would want to sit next to him at the end. I’m not sure I buy it, but I have two things to say on this.

First of all, while I think Phillip has likely exaggerated his lunacy, I’m not convinced it’s entirely an act. I guess we’ll have to wait and see how he comes across in the finale. I mean, what about the way he constantly mispronounces words? What about the racial feud with Steve? What about the pink panties? Was this all a show? Second of all, if all this was for strategy, then he can join Russell Hantz in the “Can’t Win Survivor Ever” Hall of Fame. Phillip’s strategy is great to get him to the end, but I’m not sure there’s a speech in existence that could convince people to vote for him. Let’s say he gets to the final Tribal Council and says “Psych! I’m totally normal, guys! I was just playing the fool so y’all would want to bring me to the end!” – would people buy this? Nothing makes a person look crazier than arguing that you’re not crazy. So if this has all been an act, my hat goes off to Phillip for the convincing performance. But it’s not a good strategy.

You know you have a problem when everyone in an alliance of six thinks they’re safe. Andrea was sure Phillip was going home, but to the viewers it was abundantly clear that it would be Andrea. It’s too bad Andrea wasn’t intuitive enough to realize her place in the tribe. She felt so secure that she didn’t even try to wheel and deal with anyone. When the votes were read, she was shocked.

Since everyone other than Andrea knew she was going this week, I’m interested to see who everyone thinks is going next week. It will probably be Grant, but does Grant know that? And if he wins immunity, it will probably be Ashley – does she know that? Rob has done an amazing job of making everyone feel like they’re going to the finals. It’ll be fascinating to see if he can keep it going until the end.

If Rob doesn’t win this season, it will be highway robbery. I don’t care if you don’t like him, or if you’re sick of him, or if you like someone else better. He is the only guy who has been playing the game. No one else has done anything worth a million bucks – especially the people on Redemption Island.

What did you think of the episode? Any predictions (but no spoilers!) for the next two episodes? 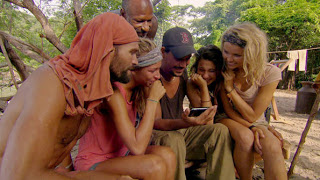 Survivor: Too Many Castaways on the Island
https://haligonia.ca/survivor-too-many-castaways-on-the-island-37367/