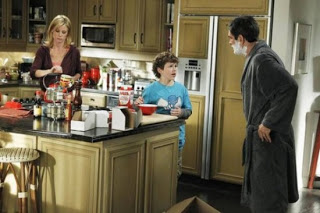 Any episode of Modern Family that focuses on Phil Dunphy is a good one in my book, so while I don’t think “Lifetime Supply” was necessarily the best episode the show has ever done (they can’t all be), it certainly delivered plenty of laughs.

It all started when Phil went for his regular checkup at the doctor and had to undergo a few tests after discovering some tenderness under his arm. The doc said he’d call if anything was wrong, which he did. The next morning (a Saturday!) while Phil was in the shower. When Phil returned the call, Dr. Doom had boarded a plane to England. And thus, the waiting game began.

On top of the obvious reason for concern – the doctor had called – Phil had another reason to amp up his paranoia. The “lifetime supply” of razor blades he’d won on a Jeopardy style TV show back in the day had run out. Since I recently saw this joke play out on Up All Night in a pretty successful way I wasn’t completely thrilled with the material, but it was worth it just for the two scenes of old-school Phil on the game show. There was a lot of comedy gold packed in there, from Phil’s haircut to his shout-out to Jay and DeeDee’s inspirational, everlasting love. 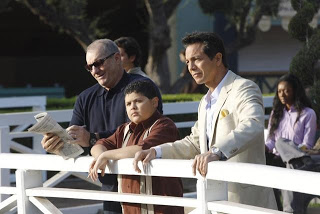 Meanwhile, Jay got a little touchy when Manny’s dad showed up. I usually love Benjamin Bratt as Javier, this storyline didn’t really do it for me. First Manny bailed on his plans to golf with Jay (loved the Bagger Vance outfit he was donning) to go to see horses race. Gloria forced Jay to go along, and they basically spent the entire trip arguing over the best way to gamble. Javier said it was to look the horse in the eye and listen to the horse tell you if he was going to win. Jay said it was to read all the stats on the horses and make an educated decision. Riiiiight. I think it’s to bet on the prettiest pony, so I guess I can’t really talk, but did anyone see the problem in not really communicating to Manny that there’s no such thing as a sure thing in gambling? Javier kept winning, Jay got mad, and it was all really because Jay feels more and more like Manny’s dad and feels threatened when Javier comes around. Sigh. We’ve been down this road before, and I didn’t feel like anything new was accomplished. 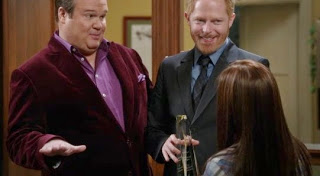 Luckily, I thought the Mitchell/Cameron storyline made up for it. When Mitch was honored with a prestigious award for environmental law and placed his trophy on the mantle, Cam dug up an old fishing trophy from his youth. And then made sure it was slightly bigger than Mitch’s. As always, I totally related with Mitch on this one. They’re not the same! But when Alex commiserated with her uncle (I love how the show puts these two soul mates together more and more), Mitch realized he’d been acting like a fouteen year-old girl and decided to put all of Cam’s trophies on display – it turned out there were a lot, for many different things. Of course, then he saw a mouse and dropped the whole box, just as Cam arrived home. It looked like Mitch was angrily kicking the crap out of Cam’s trophies. It was awesome, although I do worry that Mitch and Cam’s storylines are becoming a tad repetitive. At this stage in the series, I think the writers need to work harder to make sure they don’t just rely on conflicts due to Mitch and Cam’s differing personalities to create storylines here. They often have the same problem with Gloria, and going forward I think it’s something the show needs to be careful with.

When Gloria went over to the Dunphy residence to tutor Haley in Spanish she found out about Phil’s medical scare, and soon the whole family was there to show their support as he awaited the phone call from the doctor. Turned out the doctor just wanted some real estate help. And in case you thought this was rude and unprofessional of the doctor, Phil thought so too and tore a strip off the guy before offering up his services as real estate agent.

So what did you guys think of the episode? Let me know in the comments, and check out some of my other favorite quotes and moments below: