In case you took a break from reading the blog over the holidays, you may have missed my post about how I am FINALLY on the Revenge bandwagon. The gist? Y’all were right, the show is great. It’s campy without being stupid, suspenseful, has great characters and reminds me more than a little of one of my all-time favorite shows, Veronica Mars. So now that I’m all caught up, I was crazy excited for the show to return last night. And you better believe it didn’t disappoint! So much drama.

Ever since he showed up, Tyler has been a problem for Emily. The guy was a loose cannon, probably because it turned out he’s dealing with a serious mental illness and had gone off his anti-psychotic medications. Problem? Not if you’re the always-savvy Emily Thorne. She turned the whole situation around to work for her, in the end framing Tyler for killing Frank the security guard and thus convincing the Graysons that Tyler was the one messing with them all summer.

It all went down at Daniel’s birthday party, a “low-key” (I would kill for a party setting that pretty) clambake on the beach. The guest list was an odd mix of friends and family. Victoria and Conrad were both there, since Daniel is pretending to be nice to old Pops in an attempt to help his mom secure whatever she wants in the divorce. Charlotte was there with Declan, and Jack with Amanda (obviously, because Emily needs Victoria to be aware of “Amanda Clarke”). Ashley the party planner somehow scored a seat at the table. Emily had even invited her BFF Nolan, though he was late thanks to Tyler.

Tyler had the infamous whale camera, and was using Nolan’s footage to blackmail the Graysons. But Emily got the camera back, which kicked off the whole series of events. Tyler trashed his room looking for the camera and Emily, who’d also found his medications, alerted everyone to his unstable condition. Then Tyler showed up at Nolan’s, looking for backed up copies of the video footage. When he realized the original camera was at Emily’s he headed over there, knowing full well that she had a gun hidden away in a drawer. Of course, he tied up poor Nolan (and cut his arm!) who was waiting for Tyler’s hot doctor brother to arrive at take the crazy man away.

The drama culminated with Tyler pulling a gun on Emily at the birthday party and demanding that Conrad tell the truth about what happened to David Clarke. Nolan and Tyler’s brother showed up and tried to talk him down, but Jack and Daniel didn’t take any chances and teamed up to knock Tyler down when he wasn’t looking. Excitement! Of course, Emily was cool as a cucumber the whole time – because she’d known all along that the gun wasn’t loaded. Sly as a fox, that girl is! 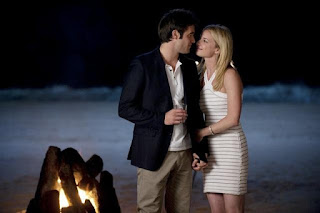 So where does this leave us? Emily and Daniel seem closer than ever, and I’m getting more and more intrigued about how we’ll end up at the beach scene we all witnessed back in episode one. Victoria’s lawyer found a doctor willing to lie on the stands for her – she claimed to be pregnant (only to miscarry at ten weeks) when she married Conrad and signed a prenup, which meant she was under duress and the contract is void. That’ll be one ugly divorce battle. And Fake Amanda’s curiosity has been piqued about her Fake Dad because of what Tyler said – that girl will have to be dealt with sooner or later.

This episode belonged to Tyler in many ways, as the actor playing him totally sold me on the crazy and delivered a delightfully dramatic and exciting exit. But the other great moments, as they often are, came courtesy of the ever developing actual friendship between Emily and Nolan. These two are great together, and Emily telling Nolan “I Googled ‘friendship’ on the interwebs. Apparently, when you have a fight with a friend, you’re supposed to apologize,” was just fantastic.

What did you guys think of “Duress”?