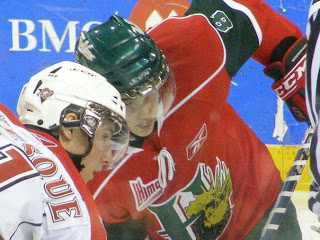 Moose can’t keep up with high-flying Remparts
After an offensive surge against Lewiston the Mooseheads came out flat against the Quebec Remparts and dropped a 3 – 1 decision.
Peter Delmas played exceptionally well but the offence dried up and his 27 save performance just wasn’t enough to steal a win.
In front of a home crowd of 13,712 the Remparts started fast and controlled the puck from the first whistle. The Moose held the game close but Mikhail Stefanovich found a way through Delmas at the nine minute mark of the first period.
The Mooseheads struggled for the rest of the game as they found themselves in the penalty box for much of the second and third periods. Unfortunately, the man advantage didn’t seem the herd as they gave up a shorthanded goal early when Mathew Brown scored after making a nifty move to break free.
Early in the third period Brent Andrews gave the Moose hope, scoring at the end of a powerplay, but the Mooseheads failed to pick up the momentum and the Remparts had no problem closing out the game, eventually adding another goal to finish the herd.
The loss is a tough one for the young Mooseheads, just a game after picking up valuable points in the playoff race, and will remind them that there are no easy games.
Three Stars
3rd Star – Danick (QUE) up two assists and finished with a plus/minus of +2
2nd Star – Martin Lefebvre (QUE) – Played an impressive defensive game but no points on 5 shots
1st Star – Mathew Brown (QUE) – Scored a shorthanded goal and added an assist

Cataractes Scrape by Mooseheads
A night after dropping valuable points to the Quebec Remparts, the Moose came out and dropped some more.
Mathieu Corbeil got the start and the Mooseheads looked just as flat just one night later. With 10,000 less fans watching, it seemed at times that the Moose were content to clear the puck and sit back, although they didn’t lead once all night.
Shawinigan got the scoring with five minutes remaining in the first and never looked back. The herd looked sloppy as the second period started and it cost them when Dave Labrecque scored his 18th of the season just 22-seconds in.
The goal gave the Moose a spark as Andrew Wigginton picked up the puck shorthanded and showed the speed that has impressed fans since being called up midway through the season. The excitement was short lived as Shawinigan answered back two minutes later with a goal from Phillipe Paradis.
In truth, the Mooseheads never looked like competing and had yet another disappointing performance in a season that is starting to drag on for fans and players alike.
Underperforming overage player Linden Bahm added the Moose’ other goal.
Announced attendance was 3,320.
One bright spot was the play of Andrew Wigginton, who along with picking up his second goal of his young career, managed to be one o the Mooseheads best players all night.
Three Stars
3rd – Dave Labrecque (SHA) – The center had a goal and an assist
2nd – Jean-Philippe Foucher (SHA) – Picked up just one assist on the night
1st –Philippe Paradis (SHA) – The winger looked dangerous all night having one goal and an assist
The Mooseheads now have almost a full week off as they head home and prepare to face Saint John on Friday and then Cape Breton Saturday.

Henry Whitfield is an avid hockey enthusiast who covers all angles of the
Halifax Mooseheads. Follow him on Twitter @HenryWhitfield for live game
updates.”