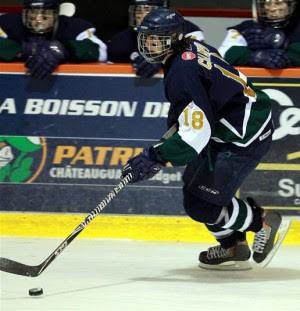 Mooseheads First Round pick, Luca Ciampini. “I’m a goal scorer. I go to the net hard and put the puck in the net and make some nice plays.”

Saturday June 6, 2010 marked another step in the rebuilding of the Halifax Mooseheads. The Moose had a number of picks in the early rounds of the Quebec Major Junior Hockey League Draft, to try and reload their roster with young talent. It all began with the second overall pick in the draft; a chance to pick-up top-end talent for the future.

Halifax selected Luca Ciampini, a sniper with the AAA midget Chateauguay Patriotes with that pick to try and add some much needed offensive flare to the squad.

The pick of Ciampini set the tone for the Herd’s strategy in the rest of the draft. In total the Mooseheads added eight forwards, four defencemen, and a goaltender on Saturday. “I really like the guys we got and I think we really improved ourselves today,” said GM Cam Russell.

Following the second overall pick the Mooseheads had to wait until the first pick of the second round to select again. They were surprised to forward Andrew Ryan is til on the board. Ryan is a big, skilled centerman from Paradise, NL who won the Telus Cup while playing with the Notre Dame Hounds of the Saskatchewan AAA Midget Hockey League.

Halifax added some more Maritime offensive talent by selecting Darcy Ashley,a PEI native, who tallied 67 points in just 46 games in the Maritime Junior A League as a 16 yr old to finish 6th in league scoring with their second of three picks in the second round.

A number of local players were added in the later rounds. Forward Ryan Davis contributed offensively for the Dartmouth Subways, but the his physical edge and grit may prove to just as valuable in the future. In the tenth round, Halifax added defenceman Joshua Desmond, also from the Subways. Finally the Moose added Luke Warner of the Pictou County Weeks and Kyle Kavanaugh of the Cape Breton Tradesmen in the 12th round.

With eight of the 13 picks being forwards it is clear that Russell feels the Mooseheads’ young defensive core is solid, and added some more offensive talent will lead this team back toward the postseason.

Below is a full list of the Mooseheads’ picks from Saturday’s draft.

Joel MacDougall lives in Halifax and writes about all sports local and abroad. Follow Joel on twitter @jmdougall.