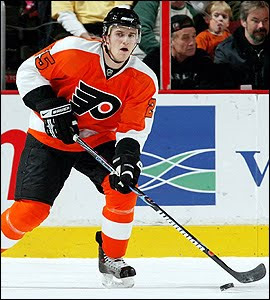 Matt Carle has been a steady presence for the Flyers in the Stanley Cup Finals.

The Philadelphia Flyers headed home after Game 2 knowing they were in danger of letting this series slip away.

Two games later and the Flyers now sit two games apiece with the Chicago Blackhawks, and the kids from Chicago look like they have no answer for the hard-hitting, aggressive, in your face play of the Philadelphia Flyers.

As predicted, Chris Pronger has been the catalyst for this team’s success and has completely shut down the high-powered, speedy offence that the Chicago Blackhawks bring to the table.

•All we hear about is Chris Pronger; well it’s his defensive partner that should get some praise too. Matt Carle is the other half to the best shutdown player in the NHL today and most wouldn’t be able to name him as Pronger’s defensive partner. He has logged an average of 25:39 minutes/game and has 13 points with a plus/minus of +10.

•Speaking of Chris Pronger, I called him a monster after game one and two and he’s continued to dominate this series. Whether it’s in the media getting under the skin of the Chicago players of manhandling their small forwards, Pronger has been all over this Blackhawks team. After going posting a plus/minus of +4 in game four, he is now +7 in this series. Not bad for a guy that plays almost half of every game.
•After being quiet so far this series Flyers Captain Mike Richards finally woke up and played like the player he can be; Picked up the opening goal on a smart, heads-up play and looked dangerous all night. If the Flyers want to keep the momentum going in Chicago they need Richards to keep his form.
•From a captain leading by example to a captain that has gone missing. Jonathan Toews has started to vanish in this series and topped it off missing an open cage with just minutes remaining in the game. The top line produced just one assist and looked pretty useless out there.
So far both teams have cemented their place at home but this is essentially a best of three series with two of the games in Chicago. Can the Flyers break down the Madhouse on Madison or will Chicago hold strong and break the hearts of Flyers fans all over.

My prediction, albeit mocked by all when made, of the Flyers winning in seven games still looks good but I’m worried they may pull it off in six.

That is for now, check later for breakdown of the QMJHL draft day and the rest of my Stanley Cup analysis.