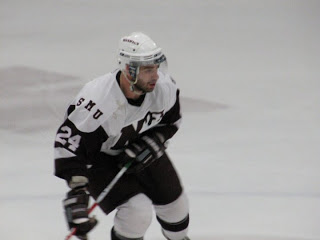 The Acquisition of Mike Danton provided an emotional spark to the Huskies.
Photo Credit: Richard Lafortune

(It took a lot longer to count them down than I thought it would, but here is the #1 storyline of the AUS season. )
Two months ago I interviewed Trevor Stienburg, the Head Coach of the Saint Mary’s Huskies national champion hockey team, and I asked him if the past calendar year had been the craziest of his career.
Considering that the Coach had spent the summer of 2008 in the hospital, he didn’t seem to think that the 2009/10 season was much of a big deal, but you have to imagine he’d be hard pressed to recall a season filled with so much disappointment, challenge, controversy, and success.
It began in March of 2009 when the AUS Champion Huskies suffered a historic collapse vs. the Western Mustangs to leave them one game short of the National Championship. Leading 2-1 in the second period, only a monumental collapse would spell the end of the Huskies season, as they only had to keep from losing by more than two goals to advance to the final.
Western would go on to score 6 unanswered goals, eliminating Stienburg’s Huskies and leaving fans shaking their heads in bewildered disbelief.
Fast forward to this past season, and Stienburg had almost his entire team back. Rancourt, Thornton, Hotham, Fergus. The Huskies were stocked and ready for another championship run.
However by January, Saint Mary’s was well on its way to one of the most disappointing seasons in AUS hockey history. The Huskies were playing uninspired hockey and mired in an extended swoon that saw them stuck in third place behind the juggernaut UNB Varsity Reds and the overachieving Acadia Axemen.
There was no joy in Huskies land. Stienburg was frustrated, players weren’t having fun, and several of the big guns on the team couldn’t understand why their production had dropped so dramatically.
That’s when the biggest press release of the AUS season came forth, announcing the intentions of Mike Danton to enroll at Saint Mary’s and lace up the skates for the Huskies
Enter the ex NHLer and former convict to a program that was desperate for a spark. It was a perfect fit for Danton, a chance to play the game he loved for a coach who was well versed in giving young men a second chance. Stienburg’s father was a parole officer in his hometown of Kingston, Ontario.
Danton turned out to be a perfect fit for the Huskies and the spark the team needed so badly. Danton took to the ice like a kid in a candy store. His wide eyed enthusiasm to be back on the ice spread like wildfire throughout the lineup and Saint Mary’s began to play with renewed vigor.
After eliminating the gritty Axemen in four games, the Huskies rolled over a St FX team that did Saint Mary’s a huge favour by eliminating the Varsity Reds.
Although in retrospect, the mighty Reds probably would have lost to the Huskies anyway.
Saint Mary’s had turned into a runaway train that dominated the competition all the way to the national final.
This time there would be no collapse. The Huskies defeated a determined Alberta team in double overtime to secure Trevor Steinburg his first national championship.
Sportsnet would interview a deliriously happy Steinburg who looked like he was going to hug the cameraman. Stienburg was so excited he could barely speak coherently, complete with the suit that he said his players tease him about constantly.
The Coach, who refers to his players as brothers and who defied a nation of critics by giving Mike Danton a second chance, had his University Cup.
Twelve months after the worst loss of his career, Stienburg had his greatest victory.
Bill McLean lives in Halifax and anchors Haligonia Sports. Follow him on twitter @haligoniasports. Listen to Bill McLean Sports Show every Tuesday at 10:30 am on ckdu.ca/88.1 FM. Email: bill@haligonia.ca