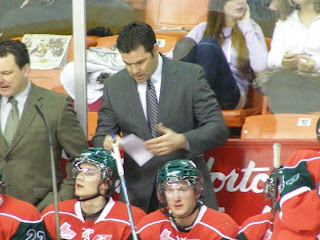 Halifax drop valuable points in playoff chase
If there are any Halifax Mooseheads fans out there who were holding onto playoff hopes, then Saturday’s tilt against the Acadie-Bathurst Titan was a must win.
Heading into the third period with a lead, the Moose found a way to blow their lead and drop the points, losing 2 – 1 to the Titans. The Moose were outshot 32 to 28.
Peter Delmas, last week’s CHL player of the week, got the start and the game also saw the return of rookie defencemen Garrett Clark.
The Mooseheads started the game perfectly as they scored in just over a minute into the game to take the lead on a Charles Bety wrap around. However, Halifax just couldn’t keep out of the penalty box as they took 4 minor penalties in the first and headed into the second period killing off a 5 on 3.
Both sides traded chances in the 2nd period, with turnovers being the catalyst for a fast paced end to end style of hockey. Delmas flashed the leather on a number of chances and kept the Moose in the game heading into the 3rd period.
A few minutes into the third and the Moose found themselves in penalty trouble again, and with just twelve minutes left until their first shutout of the season they found a way to give up the lead. Delmas stopped the initial shot from the point but the bounced to Jonathan Lessard who put the puck into the wide open net.
The goal woke up the Mooseheads who had been lacklustre in the third and had a flurry of chances but Titan goalie François Lacerte pushed them aside. Completing the comeback, Titan pest Vincent Arseneau scored off the faceoff with just 45 seconds left in the 3rd period.
Following the final whistle, showing a lack of class in front of an away crowd, Bathurst goalie Lacerte moon-walked in celebration and players taunted Moose fans as they walked down the tunnel.
Announced attendance was 5,860.
In a bizarre twist Halifax rookie Konrad Abeltshauser was given the first star of the game with no points and more than a handful of turnovers.
Three Stars
3rd – Konrad Abeltshauser (HAL) – Had a number of turnovers and no points
2nd – Vincent Arseneau (BAT) – Was his usual self drawing penalties all night and scored the game winner
1st – Charles Bety (HAL) – Scored the only Moose goal and played a strong two-way game

The Mooseheads face the surging PEI Rockets on Sunday, with the puck being dropped at 4pm.

Henry Whitfield is an avid hockey enthusiast who covers all angles of theHalifax Mooseheads. Follow him on Twitter @HenryWhitfield for live gameupdates.”