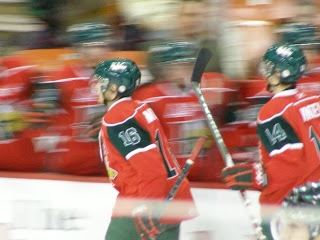 Corbeil stands tall, but Moose can’t find scoring touch
After a narrow loss on Saturday evening, the Mooseheads came out flying against the visiting PEI Rockets. But like much of this season, the Moose couldn’t find a way to get a win.
Before the game rookie Garrett Clarke had stated he wanted to get even with Josh Currie for the sucker punch that handed him a concussion and knocked him out of action for a number of weeks. However, nothing transpired throughout the game and Clarke eventually dropped the gloves in a tilt with Éric Bouchard.
With Mathieu Corbeil back in net, the Mooseheads started with a lot of energy but fell behind early when Adam Polasek scored his eighth goal of the season to put PEI ahead. The Moose showed grit as they battled back and played a tight defensive game for the rest of the night.
In the second period Jessyko Bernard scored on the powerplay and the Mooseheads outshot the Rockets 16 to 4. The Mooseheads threw everything and the kitchen sink at Vye, outshooting the Rockets 36 – 20.
In the shootout, Gerrad Grant scored to put the Moose ahead in the third round of shooters but Jarrad Struthers replied right back. Desjardins was the only other Moosehead to come close as he rung one right off the crossbar.
It wasn’t until the 18th shooter in the ninth round of shootout that goal was scored. Randall was stopped on a weak shot and Derek Famulare finally solved Corbeil to give the Rockets the win.
It was a tough way to lose but the experience will be valuable to the Mooseheads looking to the future. The Mooseheads also picked up a valuable point as they are still aiming to catch the last playoff spot.
Announced attendance was 5,516.
After getting only three points out of a possible ten over a 5-game home stand the Moose now head to the road for three games where they face Lewiston, Quebec and Shawinigan.
Three Stars
3rd – Derek Famulare – Scored the game winner in the 9th shootout round
2nd – Tomas Knotek – Played a solid two way game and picked up an assist
1st – Wendell Vye – Despite giving up some big rebounds, he stopped 35 shots and eight Moosehead players in the shootout
The Mooseheads return home Friday, February 5th when they welcome Saint John to town. Game time is 7:00.
Henry Whitfield is an avid hockey enthusiast who covers all angles of the
Halifax Mooseheads. Follow him on Twitter @HenryWhitfield for live game
Updates.