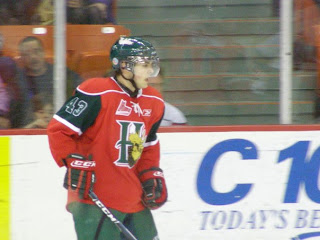 It was a night of firsts, with Dartmouth native Bradley MacDonald scoring his first goal as a Moosehead and Peter Delmas picking up his first win in a 17-save effort that saw the Moose win 5 – 1 over the Chicoutimi Sagueneens.

The Herd dominated all night, as they controlled play and showed flashes of the bright future that Cam Russell has been preaching about. After killing off three minor penalties in the first period, the Moose settled down in the second and found the scoring touch that has often eluded them much of this season.

The Mooseheads offence finally clicked and five different players scored for them. Bradley Macdonald kicked off the scoring and Carl Gélinas, Brent Andrews, Jessyko Bernard and Travis Randall each had a goal as the Mooseheads rolled over the Sagueneens.

Bradley MacDonald worked hard all night, showing off his speed and looking comfortable with extra ice time. Although Gabriel Desjardins failed to get on the score sheet tonight he displayed the talent that fans have been waiting to see all season and for the second straight game he was one of the top players for the Moose.

The Moose failed to score on five power play opportunities but showed improvement, connecting with the post on several shots. Captain Tomas Knotek is mired in a small goal drought as he has now failed to hit the back of the net since his return from the World Junior Championship in Saskatoon.

Breaking their 8-game losing streak, fans will now be hoping that the Mooseheads can keep the momentum going as they try and pick up some points going down the stretch.

The Moose will attempt to win two in a row this Sunday when Jake Allen and the Drummondville Voltigeurs come to town. Game time on Sunday is 4:00.

Henry Whitfield is an avid hockey enthusiast who covers all angles of the Halifax Mooseheads. Follow him on Twitter @HenryWhitfield for live game updates