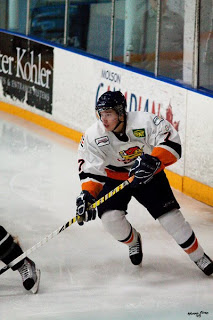 Corbeil looks shaky; Moose waste chance to win
After two straight wins, including knocking off second place Drummondville, the Mooseheads forgot to come out and play Tuesday night. In a game where the Moose had every chance of walking away with a win, the Shawinigan Cataractes walked all over them and outskated them on the way to a 5 -2 win.
The Moose came out flat footed, in front of an announced crowd of just 4,036, and never looked like competing. After beating Jake Allen on the weekend and playing competitive hockey in their last few games, fans must be wondering what caused the Herd to have such a drastic turn around.
After sitting out the last two games, Mathieu Corbeil returned to start in net but looked extremely shaky. It took Shawinigan just under two minutes to put the puck past Corbeil and Shawinigan Captain Yannick Veilleux added a very soft goal to put the visitors up by two.
Captain Tomas Knotek replied to keep it close before the end of the first, with his first goal since returning from the World Juniors in Saskatoon. The two teams traded goals in the second period, which saw Andrew Wigginton, a Lower Sackville native, score his first QMJHL goal.
The Mooseheads kept it close in the third period Pierre-Alexandre Vandall scored midway through the period to put the game away. The Cataractes would add a short-handed empty net goal and outshot the Mooseheads 36 to 19.
The few fans that stayed until the final horn were visibly upset as the team neglected to announce the three stars of the game. It appeared that patience is running out for many fans who just want to see their team compete on a nightly basis and so far this season have shown inconsistency. .
The Mooseheads are off until the weekend until they face Bathurst Titan on Saturday. If the Moose want to make the playoffs this game is a must win and will be a test of how far they have come since the beginning of the season.
Three Stars
3rd – Andrew Wigginton (HAL) – Scored a highlight reel goal and was one of the few Mooseheads to skate hard all night.
2nd – Pierre-Alexandre Vandall (SHA) – 1 Goal and a plus 2 rating
1st – Yannick Veilleux (SHA) – 1 goal and a plus 2 rating