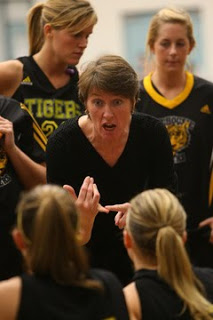 Men Drop Two; Women beat X, nearly upset CBU
Men’s Basketball
A weekend proving ground for the AUS champion Dalhousie Tigers turned out to be just that after hosting the Cape Breton Capers and St. FX X-Men.
The Tigers proved all their sceptics correct; the champs cannot compete with highly athletic basketball teams.
Dalhousie lost to the nationally ranked Capers 80-65 on Saturday, followed by a 69-54 trouncing on Sunday from the third ranked X-Men.
Jimmy Dorsey scored 27 points in leading the Capers while Jeremy Dunn paced the X-Men with 17. Simon Farine led the Tigers with 21 points vs. X and 26 points vs. CBU.
The biggest knock on the Tigers this season has been their inability to play well against full court transition style basketball teams like the Capers and X-Men. Dalhousie did nothing to discredit the opinion, trailing both teams by large margins by the start of the fourth quarter.
The losses dropped the Tigers to 5-5 on the season and left them looking for answers as to why they cannot stay close to the Capers and X-Men at home or on the road. All of Dal’s 5 losses have
come to the talented teams, each by a double digit deficit.
Women’s Basketball
Anna Stammburger’s rejuvenated Dalhousie Tigers suffered heartbreak and triumph in a wild and wacky weekend of actions for the women’s basketball team.
The Tigers nearly pulled off a shocker with an upset bid on undefeated Cape Breton before collapsing down the stretch under the relentless pressure of the Capers. Dalhousie recovered quickly to defeat the deep and talented St. FX X-Women the next day.
On Saturday night, the Tigers led 51-46 with 3 minutes to play but turned the basketball over countless times vs. the Capers suffocating full court pressure leading to a slow but sure comeback that resulted in a 53-51 victory for Cape Breton.
Caitlin Crosby led the Tigers with 21 points while Jahlica Kirnon had 17 for the Capers. The nation’s leading scorer, Kelsey Hodgson, was kept in check by the defensive play of Rachel Harrison. Hodgson finished with 10 points on 2-15 shooting.
On Sunday afternoon, the Tigers played their best game of the season, leading from start to finish in a convincing victory over the third place X-Women. Despite a valiant effort in the 4th quarter by St FX, the Tigers handled the pressure defence and held on for victory.
The Tigers frontcourt overpowered the smaller X-Women. Caitlin Crosby had 12 points in the first half followed by Laurie Girdwood’s 16 in the second half to lead the Tigers.

Both teams travel to Memorial this weekend for two games each. The men’s Tigers swept the Seahawks at the Dalplex in November, while the women split their two games….Anna Stammburger has to wonder when she’ll catch a break. Just as her team is starting to show real progress, they have to go try and win in St.John’s, a practically impossible achievement in the Doug Partridge era. However, the X-Women did win a game at MUN in early January……Caitlin Crosby is on her way to a team MVP season. The 5th year senior is leading the Tigers in scoring and was a force all weekend on both ends…..The Tigers men are desperate for secondary scoring. Joe Schow was brought in to be an offensive force in the post but the Medicine Hat native has been woefully inconsistent. In the critical games this weekend, Schow averaged 10 points a game……I covered the Dalhousie women’s volleyball team on ssncanada.ca this past weekend and they looked very impressive in a sweep of the Memorial Seahawks. Louise Facca has joined the team and brings dynamic offence and athleticism. Lauren Schinkle played very well and earned Dalhousie female athlete of the week honours. At 4-6, the Tigers have to regret losing last week to X and UNB. The Tigers led the X-Women 2-0 but could not close them out, then lost a five setter the next day to the V-Reds…..if you haven’t seen the Tigers Men’s Volleyball team yet, you should. Sander Ratsep and Max Burt may be the most exciting duo in the country; 2009 AUS MVP Ratsep is the most dynamic athlete on campus, and Burt at 6’9’ is pure power from the middle position.