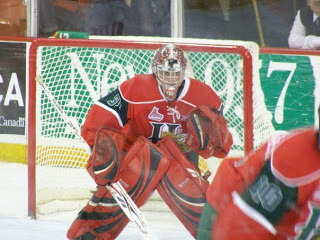 When the Halifax Mooseheads picked up Peter Delmas at the trade deadline they knew that they were picking up a solid veteran would be able to steal some points for a rebuilding franchise.

On Sunday afternoon Delmas did just that, as he shutdown the Drummondville Voltigeurs in a 2 – 1 win that saw the Moose outshot 36 -22. The win was the second in a row for the last place Mooseheads and deserved to take home the points.

The Mooseheads started strong and put the pressure on Jake Allen and the Volts early. Playing physical and applying pressure, the Moose were able to keep the Voltigeurs on their heels much of the first period. Konrad Abeltshauser got the crowd on their feet late in the first period with a wrist shot past Allen on a Mooseheads power play.

Late in the second period Pascal Amyot converted on another power play, scoring his sixth of the season and putting Halifax up 2 – 0. By scoring on two power play opportunities, the Moose snapped a drought that had seen them unable to convert on five chances Friday evening.

League scoring leader Sean Couturier answered back for the Volts with his 29th goal of the season late in the 3rd period to ruin Delmas’ shutout hopes but the Moose held on tight as they killed off a late penalty.

Mooseheads Captain Tomas Knotek picked up an assist, as he has still failed to score since his return from the World Juniors. Bradley MacDonald came close to adding a number of goals but just couldn’t get the puck past Drummondville’s Jake Allen.

Before the game, Team Canada silver medalist Jake Allen was presented an award from the Mooseheads for his efforts at the World Junior Championships in Saskatoon.

3rd Star – Sean Couturier (DRU) – Had the Volts only goal and showed why he leads the Q, threatening to score all evening.

The Mooseheads will try to make it three in a row on Tuesday when the Shawinigan Cataractes are in town. Game time is 7:00.
Henry Whitfield is an avid hockey enthusiast who covers all angles of the Halifax Mooseheads. Follow him on Twitter @HenryWhitfield for live game updates