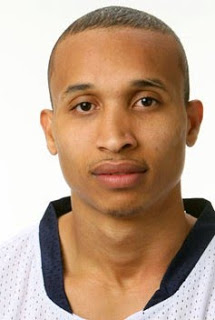 The city of Halifax may not know Adris DeLeon yet, but the city of New York already does.  Deleon, who plays the guard position for the Halifax Rainmen, has already established himself on the courts of New York.  Based out of Washington Heights, NY, Adris was originally born in the Dominican Republic and moved to NY as a youngster.  He got his name playing streetball in NY playing with the likes of Ron Artest (watch him put it through Ron Artest’s legs), Rafer “Skip to My Lou” Alston and the Rainmen’s own, John Strickland.  If you Google Adris DeLeon’s name, it’s not hard to see that he has earned a name for himself wherever he has played and continues to make his mark with the Halifax Rainmen.

Single ladies of Halifax….you can even win a date with this guy.

Romy (Haligonia.ca): So, what have been your first impressions with the city of Halifax?

Adris DeLeon:  The first impression that I have of Halifax is that it’s crazy cold out here. But no, it seems like the people are good supporters of the sport and the team, and they are very friendly towards others.

Romy (Haligonia.ca): The team has had an impressive start to the season, why do you think the Rainmen have been so successful thus far?

Adris DeLeon:  It’s still early to predict what’s going to happen. But the good thing that’s happening to us is that we are finding ourselves. I think we really improve each game we play because of the older guys helping the younger players.

Romy (Haligonia.ca):  Your nickname is “2 Hard 2 Guard”, what’s the story behind the nickname?

Adris DeLeon:  My nickname, huh? haha… It’s a long story but I started playing street ball for a while and because of street ball I had a chance to go to college. I never played high school ball and they saw me play in the park and decided to help me with school even though I only played AAU basketball.  My nickname came from playing outside against a lot of big time players, and I played really well against them. For the last couple minutes of one game, I was playing at the highest level. Every shot was dropping, I was driving, I was passing, and the people were like “he’s hard to guard” and from that day on “2 hard 2 guard” came along, and since that day I’ve made sure I represent that name everywhere I go.

Romy (Haligonia.ca):  Who has been the toughest player you’ve had to play against?

Adris DeLeon: I’ve played against a lot of great players from big colleges and big time NBA players. But I can say Ron Artest and Kyle Lowry from the Houston Rockets were crazy but I held my own. But there’s been other players in New York that have been tough match ups too, but that people might not know.

Romy (Haligonia.ca):  You were born in the Dominican Republic, how often do you go back to the D.R.?

Adris DeLeon: I was born out there and I came to New York when I was like 10 years old. So since then my family always goes, but most of the time I stay in NY because of summer ball or traveling for AAU and college ball. I’ve been out there to try out for the national team and it was a good experience for me to be picked to come try out. But I only go out there for basketball, but hopefully I can go soon and enjoy it and try to see my old friends and my family, especially my grandparents.

Romy (Haligonia.ca): How bad do you miss the hot weather when you’re in places like New York and Halifax?

Adris DeLeon:  I miss it because I’m scared of the cold but that’s all.

Romy (Haligonia.ca):  Growing up in New York, who did you look up to when you were a young basketball player?

Adris DeLeon:  In New York, I looked up to my parents that raised me with manners and kept our family close. My father used to get on me to make sure I always do the right thing. My mom would get mad because she doesn’t like when people scream at me but I’m a momma’s boy so yeah, lol… But I’m really proud of my parents and the job they did, and my brother and sister also did well following their lead . But towards basketball I really think I love watching Ray Allen play, even though he’s a little older now, and Penny Hardaway. But a close friend that I’ve seen become successful with basketball has been Luis Flores. He played in college and went to the NBA and we’re from the same neighborhood and I respect that man because I’ve seen him work hard for everything he has.

Romy (Haligonia.ca): What’s songs/artists are on your iPod right now?

Adris DeLeon:  Song on my iPod…a lot of Spanish music, reggaeton, bachata and R and B, but you know you need to have Jay-Z to get you pumped up for the game…haha

Shoutouts go out to Adris for taking the time out of his schedule to answer our questions, check out Adris’ website adrisdeleon.com and also watch him live here in Halifax at the Halifax Rainmen home games.