I was in Shoppers on Thursday, looking for the air cast for my ankle (expensive stuff, I was surprised). Passing through cosmetics, I saw the little bucket again. Remember my little polish haul for CAD3.99 a bottle? It’s the same bucket, and this time it’s even fuller. Omg!

Turns out the cosmetics manager was doing some “cleaning” and more polishes ended up in the bucket. The staff even brought out another plastic bag for me to pick from as she knew I was saw most of them last time already, lol. Unfortunately, there were a lot of repeats/ multiples.

Want to see what I found this time? 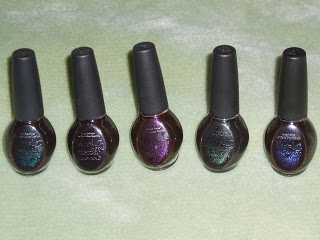 Nicole by OPI, the dark side, lol. I don’t know what it is about these bottles, but I couldn’t stop myself from getting them all. I found some before at Winners, CAD9.99 a pair but not to this extent.

I don’t know whether the glitters would show up on the nails as beautifully as in the bottles, I guess we’ll have to see swatches later 🙂 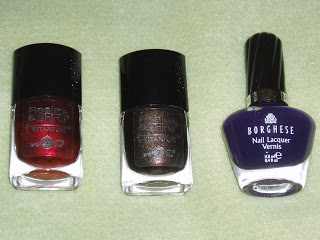 Also found something I haven’t seen much around here: L’Oreal Resist & Shine Tatanium – the Black Gloss collection. I only found them on L’Oreal UK website, guess North America wasn’t supposed to have them.

I went a little crazy with the nail polishes lately, I admit, but the idea of owning these hard-to-find colours excited me so much. Hope you don’t mind haul posts, as you know it’s not meant to be bragging or anything, right? If any of you have been looking for these, I could get you some too, while they are still on sale.

On the way out, I saw the sign the store put up a little early – $10 gift card with $50 purchase starting Saturday. Well, I could have waited to buy these for that gift card, but the colours might also be gone by then. Who knows! Decision, decision 🙂