Happy New Year!… err…. that’s coming a little late, now isn’t it? I decided to treat myself to self-hosting and a new template for Christmas, so I’ve been busy over the holidays getting everything set up.

The new Eat This Town just became live yesterday and I couldn’t be any more happy with it!  Much thanks to Therrol who did all the dirty work for me, and Lee-Anne, who designed my new logo/banner! Now that my blog is back up and running, you can expect to see more frequent posts from now on . I promise!

Let’s just pretend that it is still early January and that Best of 2013 lists are not yesterday’s news. I want to show ya’ll my favourite meals from last year! I don’t normally blog about finer dining but that could very well change this year. I just think it is very subjective, and it is too costly to hit up every swanky spot in town within a short enough span to really get a sense of what’s good. If I am going to spend a lot of dough on a meal, I want it to blow my mind. Unfortunately, it is easier to impress me with a hamburger than with an overpriced hunk of meat. With that said, here are the meals that blew my mind in 2013!

The award for best meal of the year goes to Stories at the Halliburton Inn. This restaurant is known for its scallop appetizer and especially for its game meat. I had an excellent feed of bison carpaccio and this amazing venison dish. 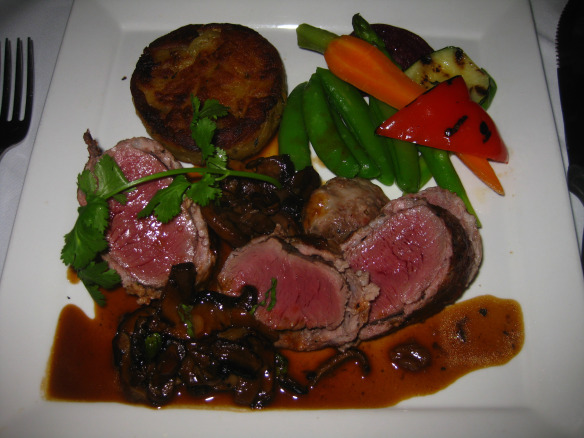 My best experience at a new restaurant was at Edna, where I had this very tasty swordfish dish that followed up a Tatamagouche oyster and a crisp refreshing salad. 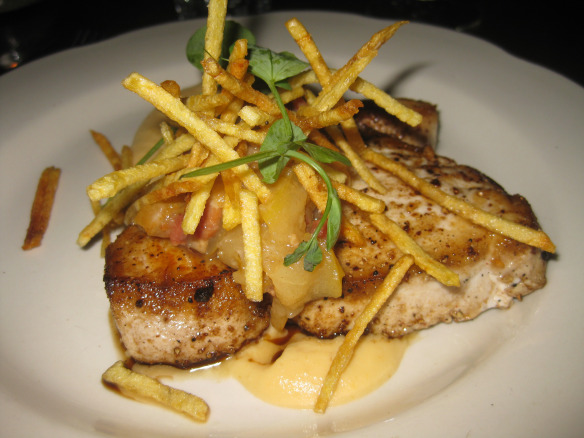 Well, Edna might actually tie with LaFrasca just because of the Tagliata di Tonno ($24), which is seared rare tuna with squid ink risotto. My meals at LaFrasca have been hit or miss, but this one was definitely a hit. 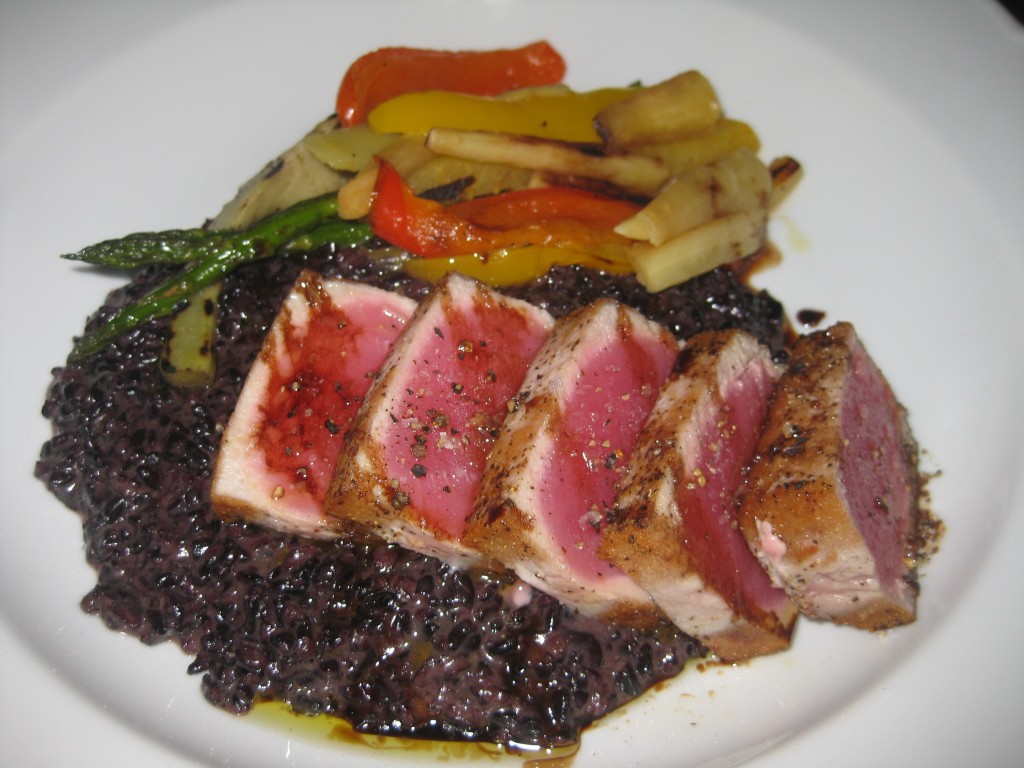 Tuna and black risotto at LaFrasca

Gio gets 1st place for service. I can’t speak highly enough of the service I received at Gio for my birthday. It really made for a special night.  I had the elk tenderloin. This $42 dish is pretentiously described as “tenderloin of cervus canadensis, a large gregarious deer, smoked, enrobed in elk mousse and caul fat, seared rare, with pommes berny, porcini mushroom purée, oyster mushrooms and cocoa jus.” It was great. But it was the service that blew my mind. 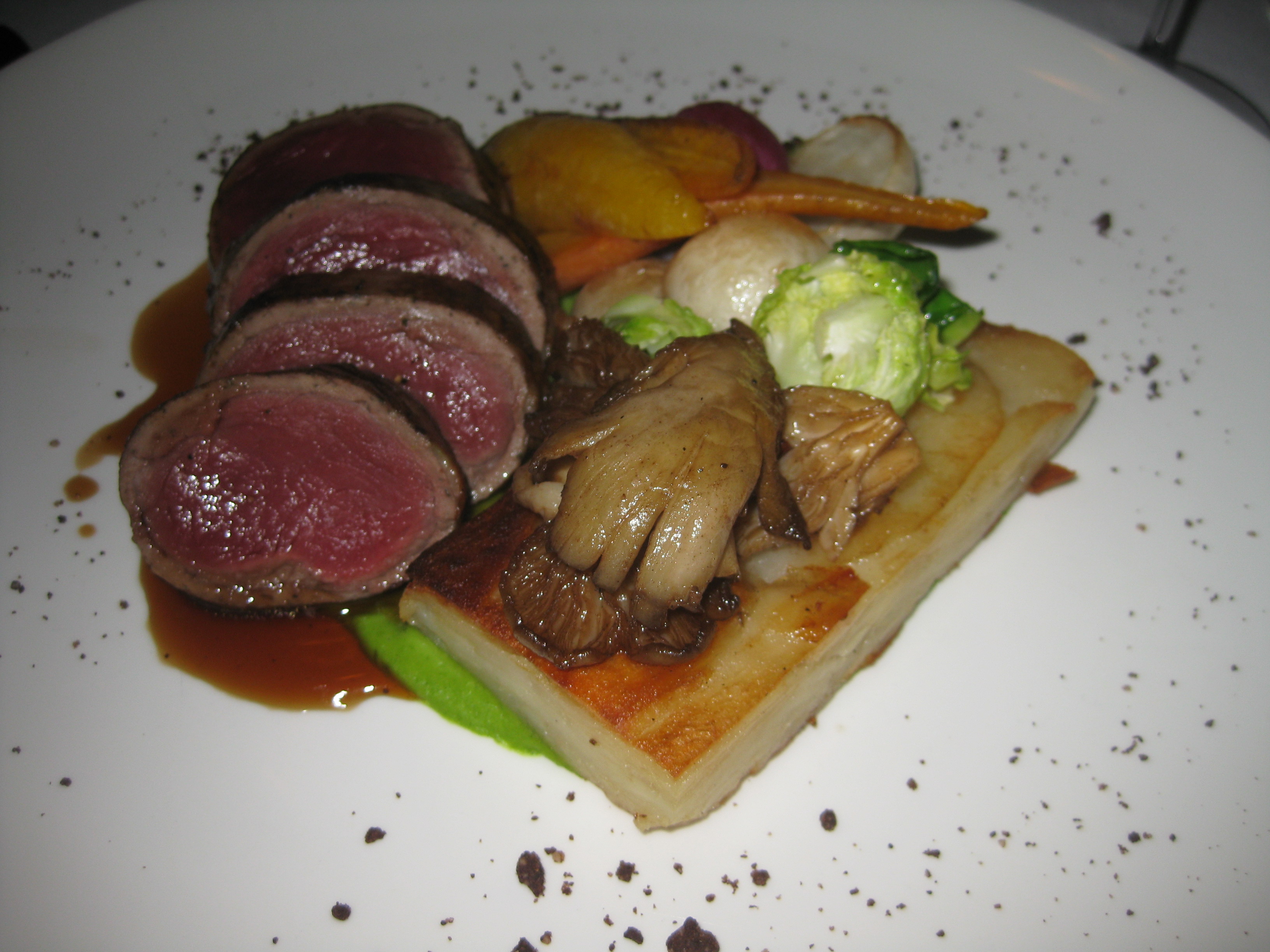 The award for most satisfyingly novel eating experience goes to EnVie, where I had my first “raw food” dish.  It was a zucchini “pasta” with a cold tomato nut sauce. I had never eaten anything like this before, and I actually really enjoyed it. The award for best salad goes to Brooklyn Warehouse for the Dragon’s Breath Salad ($9) which totally lives up to the hype. 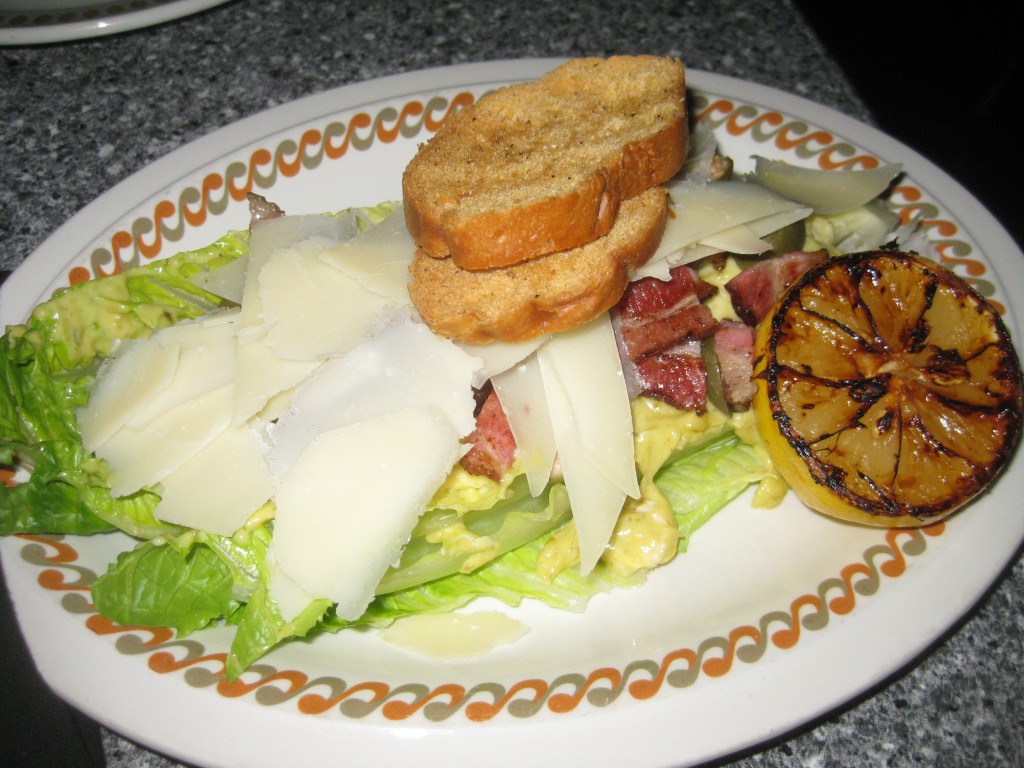 But I must also give mention to the “Kale, Caesar” Salad ($9) at 2 Doors Down. If this isn’t Halifamous yet, it will be soon. 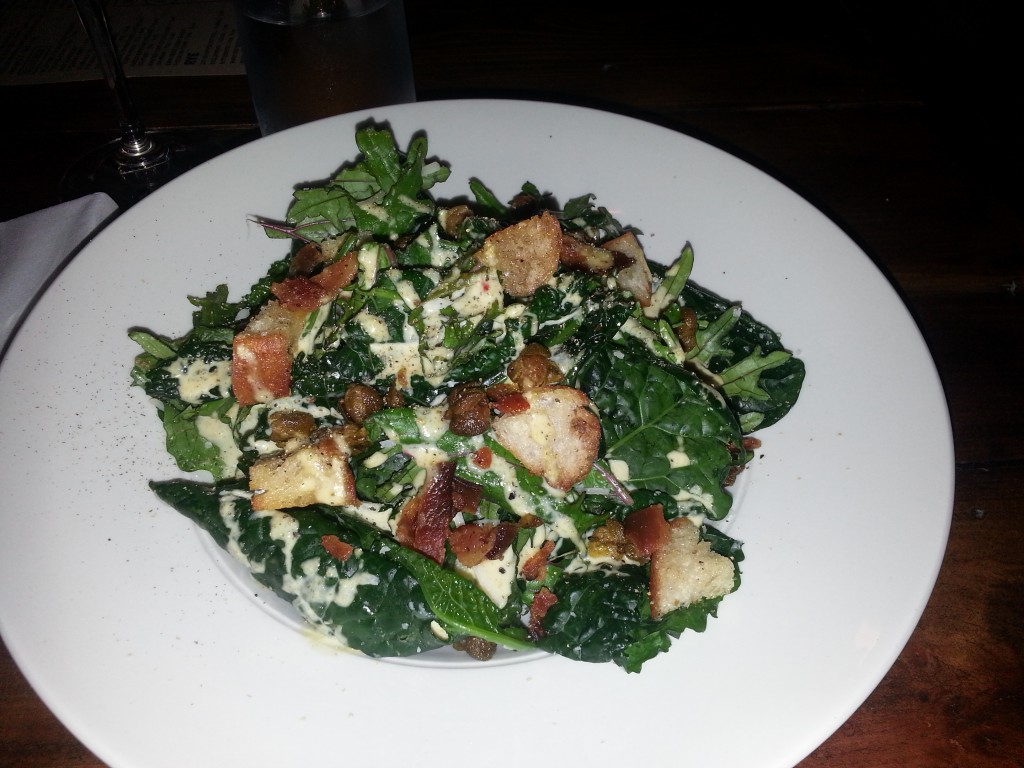 “Kale, Caesar” Salad at 2 Doors Down

I hardly ever order the same thing twice at a restaurant due to my unbridled sense of adventure. But I have eaten the Meaty Meatless Burger ($15) at 2 Doors Down on two occasions, and I think it must be the best veggie burger in town! (Quest pending). 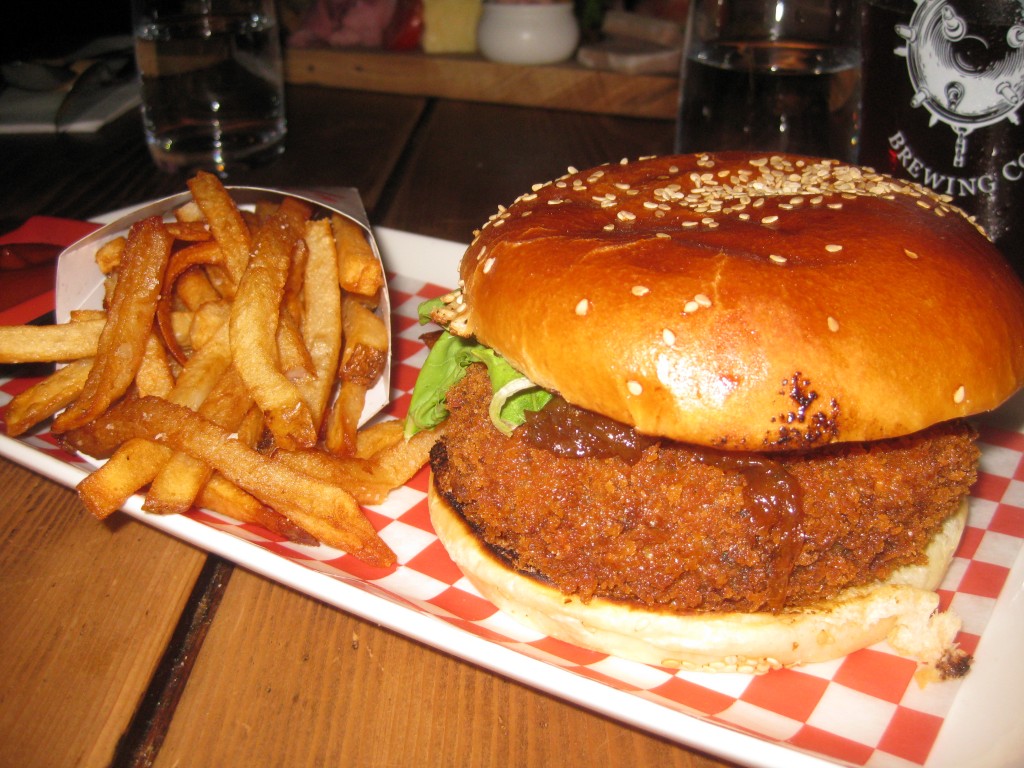 Meaty Meatless Burger at 2 Doors Down

The best pub-type meal of 2013 was the Bangers and Mash from The Stubborn Goat. While I am lukewarm about the sharing plates, and relatively inexperienced with the pizza, I was definitely impressed with this dish. I also had a bite of my Dad’s meatloaf which was equally amazing. 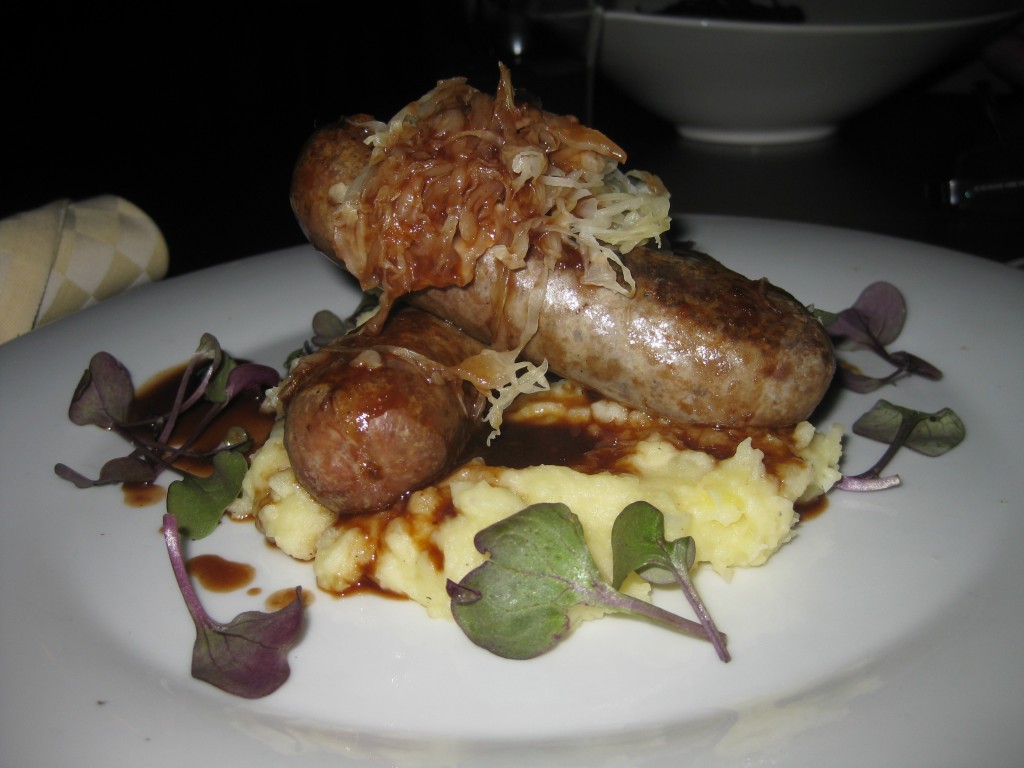 Bangers and Mash at The Stubborn Goat

Whereas The Stubborn Goat won me over for gastropub fare, my pick for best overall pub meal goes wholeheartedly to the Mic Mac Bar & Grill for their bacon wrapped tenderloin ($16 for 7oz), which in this case came with a skewer of shrimp for a great value! I still drool every time I think about the Mic Mac Tavern. 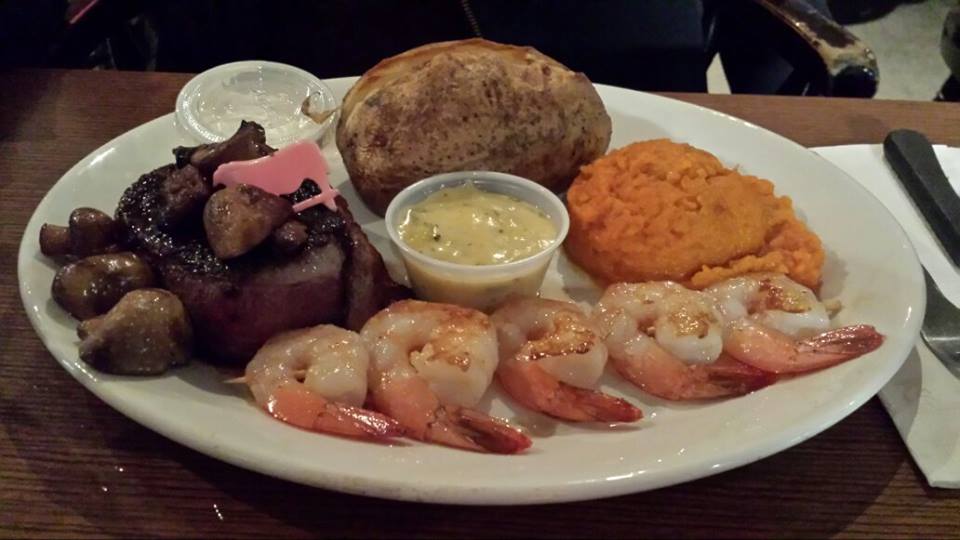 Last summer I embarked on a fish ‘n’ chips quest in which I reviewed the 5 fish ‘n’ chips shops most accessible to pedestrians from downtown. And you know what? I never actually announced the winner! This fish was so fresh and these fries were so tasty, I think this meal is worth mentioning as one of my best meals of 2013. The award for best fish ‘n’ chips goes to Evans Fresh Seafood in Alderney Landing! (2pc – $9.99) 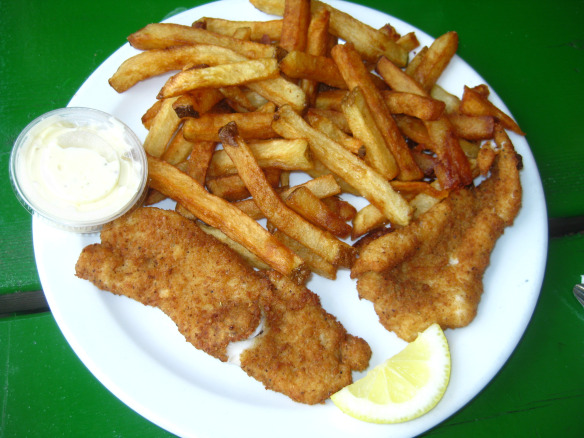 That’s a wrap! Make sure to follow my blog to see what happens in 2014. I may be on a bit of a health kick right now, but I intend on blogging with a vengeance! I hope 2014 finds you well – happy eating!