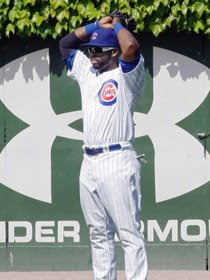 Not Likely To Be a Poster for Under Armour Anytime Soon.

Considering he shares the same name as a major North American board game manufacturer, it would only make sense that Milton Bradley has given us so many hilarious moments throughout his career. Unfortunately for Milton, in every instance, we find ourselves laughing at him, and not with him. Years from now we won’t remember Bradley for his ability to hit 15 home runs a year (seemingly the same number of teams he’s played for) nor will we remember the ludicrous contract he signed with the Chicago Cubs over the off season, guaranteeing him 30 million over the next 3 years.
No, years from now we’ll remember all the head shaking, painful, and immensely funny moments he gave us. He is the Larry David of Major League Baseball, the Michael Scott of the sporting world. Reading Milton Bradley’s resume of gaffs and blunders is akin to watching the weekend long struggle of Gaylord Faulker in Meet the Parents.
In early 2004, Bradley was traded by the Cleveland Indians to the L.A. Dodgers, after Bradley and Indians manager Eric Wedge got into a heat argument concerning Bradley’s laziness in running out a dropped pop fly. Later that season, Bradley threw a water bottle at a fan in Dodger’s stadium. In Bradley’s defence the water bottle had been thrown at him first.
In 2007, Bradley, now a San Diego Padre, got into a heated argument with a first base umpire after he reached first base safely on a single. Manager Bud Black came out to intervene and tried to separate Bradley by pushing him away, in the process Bradley fell, tore his ACL, and had to miss the rest of the season in one of the most bizarre moments of all time.
Well this past weekend, Bradley outdid himself. You probably didn’t see it after devoting your night to game 7 of the NHL finals. Bradley misplayed a fly ball in a game at Wrigley field vs the Minnesota Twins. But that’s not the story line here. Later in the game, Bradley caught a fly ball and then posed for the fans in the outfield, trying to relay a message of relief of having made the catch. Bradley then tossed the ball into the stands for a souvenir. The only problem; there were only 2 outs!
And there were Twins runners on base. One run scored on the play and another player was able to go from first to third. Bradley could be seen with hands on head staring blankly at the infield as a jubilant Minnesota Twin rounded second base.
Good news for Cubs fans, however. The play did not factor into the score, and Milton didn’t get into a heated argument with an umpire, claiming that his catch should have been the third out. Nor did he get thrown out of the game or injure himself. Not a bad day for Milton considering he’s had worse.

Most Recent Milton Bradley Gaffe his Best Yet
https://haligonia.ca/most-recent-milton-bradley-gaffe-his-best-yet-2866/