Four years ago, I accomplished my very first 5k and that day will forever be one of my favourite days of my life for so many reasons I'm sure I've spoke about many times here before. In short, I fell in love with running and I fell in love with my new life.

Four years ago, I accomplished my very first 5k and that day will forever be one of my favourite days of my life for so many reasons I’m sure I’ve spoke about many times here before. In short, I fell in love with running and I fell in love with my new life.

It represented something to me that you shouldn’t put limits on yourself. Technically, to me, I had already accomplished the “marathon,” it was just a different kind of marathon.

I met a very special girl in person for the first time that day and I learned that you don’t need a speedy time or a 10k or a Half Marathon or a Full Marathon under your belt to feel accomplished. All you need is action and a positive attitude.

And while I didn’t get to train and run the Half Marathon last year as originally planned since the Little Peanut was on this way into this world, I knew that there was really only one place to start to conquer myself again in this “post-pregnancy weight loss marathon” and it was the Bluenose 5k, of course! I made a promise to myself that I was doing it again this year, regardless of where I was in my post-pregnancy weight loss because the very least I could do was walk it. Just being there and getting out there and being a part of all of the positive energy and electricity that radiates through everyone and the enthusiasm of the participants and the supporters is enough to lift you up high in the sky.Those people are amazing. It truly does show you that you are capable of more than you know.

This year I got to share this day with my son. I decided not to go to California after all and the husband is there right now. It was a risky move taking him because he’s a baby that needs his naps and this would mean that he’d have to nap in the car on the way there. I left early trying to give him some semblance of a nap, but he only napped for about 40 minutes so I knew things probably weren’t going to be a bit challenging. Not to mention the speakers are LOUD & they were jazzing everyone up before the race. 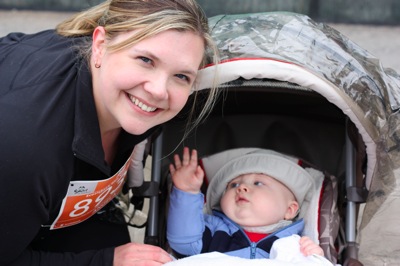 But it wasn’t just us! We had the PLEASURE of walking this event with these other lovely people: Julie, Tammi, Lynn & Lynn’s hubby Jason (not pictured) 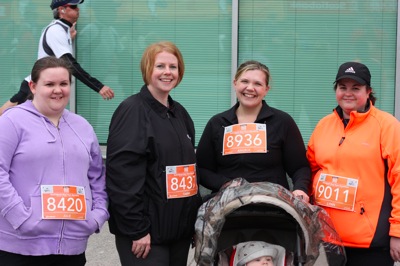 He did really well until the 3 kms point where he started to fuss and wanted OUT of the stroller. Awesome.

Thankfully I brought an Urgo with me that I borrowed from a friend because the next thing ya know we had to stop and Lynn & Jason are helping me get strapped up & re-positioning my race bib. Jason pushed the stroller and I huffed along trying to settle a cranky baby! Note: “If you’re happy and you know it” is a real hit with babies, even when they are in the back seat crying in the car wanting out of the car seat. So that bought us a few extra minutes singing songs which was a funny turn of events. He seemed pretty good by the time we got to the homestretch and the positive note was that it made me feel extra hard core doing the 5k with my baby strapped to me 😀 It was hard work!

We crossed the finish line walking in 56:58.4 which I think we can be very proud of. It’s a far cry from the last time when I ran it (31:11). Cameron even got his very own medal from one of the nice ladies at the finish line. 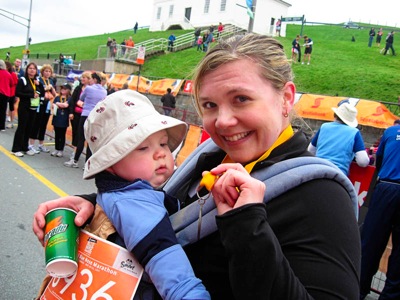 Can’t you tell he’s just as jazzed as I was? lol 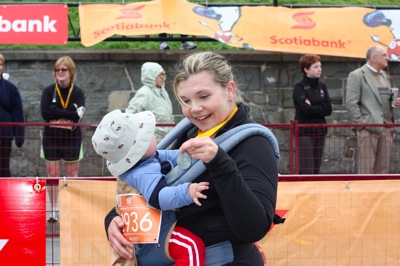 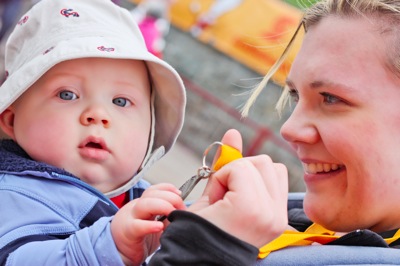 You would think this was his very “first” 5k, but really it wasn’t! Little did I know that he took him along for the Santa Shuffle in 2009 too 🙂 He’s in there unbeknownst to me at the time: 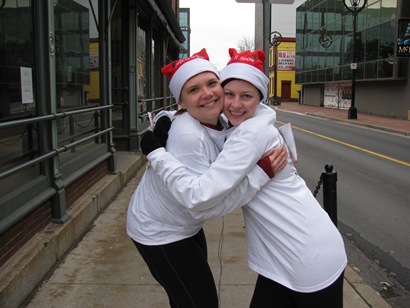 And speaking of “post pregnancy weight loss,” check my ticker on the side of the blog! I’m very excited about my progress. Slowly but surely I’m on my way back “all the way.”