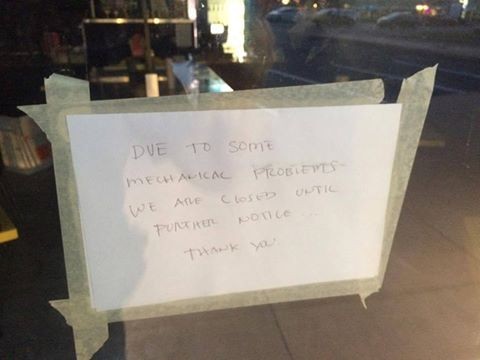 Something fishy and Battered Fish again. This sign is on the Woodside location, and I have heard there are similar signs on the Fall River outlet and their one out of province location on Queen Street West in Toronto. Similar signs appeared on other locations earlier this year but hey all eventually reopened a month later.

Also in Sunnyside, RUA Sports Fanatic is bringing it sports fan goods to Bedford. Just in time for Jays fever to kick in again.

One tenant is confirmed for the new mini-mall on Cole Harbour Rd where KFC used to be. Sherwin Williams will be going in the double space on the right.

PC Medic has moved from Robie Street to Joe Howe.

Parker Street Food Bank’s, Great Things in Store is moving their Almon St store a few numbers to the east.

Times change and after 34 years, Video Difference is closing both locations. Video Difference meant a lot to me there are so many Independent films and documentaries that I would have never seen without them. Though I am part of the reason why they closed. I have not rented a movie anywhere in over five years and have shifted my consumption to digital delivery, as have many others.

Finer Things has moved from Agricola at Almon to Quinpool across from Subway.

Project 9 Furniture has moved into that Agricola space and left their original home on Dresden Row.

All Ben Moss stores in the chain are now closing, liquidation has begun, but stores are expected to remain open until mid-December. All lifetime warranties are now void.

Ahead of IKEA’s new store opening they had folks in town visiting over 70 HRM homes to see how we live so they can better set up and market their store. I was one of the homes they visited. They came to my house and asked to look in my closets and cupboards, to see how I store (or hide things). We talked about what I use each space in my home for do I eat there, rest there, create there, entertain there, etc. They also asked where I would go today to look for certain types of items. Two comments that they made that interested me were, we really like to have a collection of boards games, and they were also fascinated by Kent as many folks mentioned them, but Kent isn’t in any of the markets they are already in.