After almost an entire portfolio tasting at L’Acadie Vineyards, we made our way over to Foxhill Cheesehouse for “Sweet & Delicious” a pairing of Icewine & Gelato! Foxhill is offering the same delightful combo this wknd, $5 pp, on the 13th & 14th from 2-4 pm. WHAT could be better than that? Rich and creamy gelato drizzled with Muir Murray Estate Winery‘s Solstice Icewine. After several samples, I decided on a Maple gelato, though the creamy vanilla would be the best pairing to showcase Muir Murray’s Solstice. 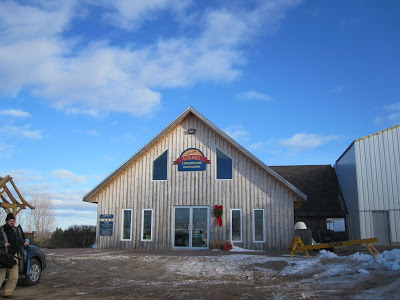 Maple Gelato is among the many flavours of Foxhill gelato to make your mouth water! 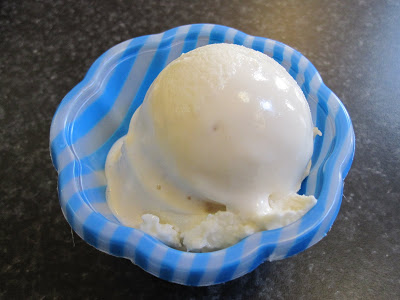 And so, a carload of ladies rife with sugar-comas made our way over to Muir Murray Estate Winery in order to sample their other offerings. As Nova Scotia’s newest Estate Winery, Muir Murray is a lovely venue to stop in on a chilly winter’s afternoon, as their wines are just the trick to warm you up.
We tried (and re-tried in Solstice’s case) several of their offerings. I started with their Summer Song, described in the winemaker’s notes as “light, bright and happy.” Who wouldn’t want to try such a libation? The Summer Song was just as it claimed; light and refreshing, with a slight taste of sweet strawberry and citrus, this is the ultimate summer afternoon sipping wine 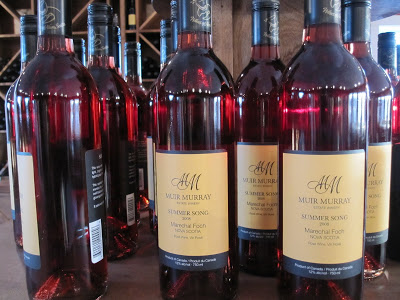 Next, we moved on to some of Muir Murray‘s whites; Valley Mist and Atlantic Tide. The former is a Seyval, crisp with citrus notes, while the latter is created using the L’Acadie grape and has a smooth, rich mouthfeel. I was particularly drawn to the Atlantic Tide as the winemaker’s notes alluded to the pairing of fried fish. I have to agree that this wine would certainly up the ante to a Fish n’ Chips platter!
From there, it was on the the reds. We sampled Muir Murray’s Cape Split, a Leon Millot and Eagles Soar, a Baco Noir. My friends and I commented that the tasting notes hit the nail on the head here- hints of anise, black cherry and dark chocolate were obvious and aroused the palate. With this tasting, I was immediately excited. I had never been particularly fond of Baco Noir, but this winery’s offering quickly changed my opinion! It’s slightly lighter than other I’ve tried and contains notes of bittersweet chocolate and cinnamon. As the tannins are lighter here, this Baco I found this Baco to be drinkable with or without food.
Then, it was on to dessert, in the form of the winery’s Solstice. I love the winemaker’s notes on this one “It’s impossible not to like this wine.” I couldn’t have said it better myself. This is clearly a dessert wine, rich and sweet, though it lacks the cloying, syrupy consistency that I’ve encountered in other Icewine products. 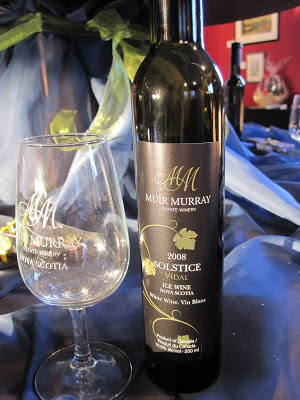 Upon leaving this winery, I expressed again how happy I was to finally taste the wine at the winery itself. There’s something to be said for sampling wines where they’re created. It lends a certain familiarity to the product and instills the desire to support those creating it. On our way to our next stop, Domaine de Grand Pre, we witness a group of Bald Eagles both soaring and huddled in the trees. It brought a smile to my face as I thought of the fact that I had finally connected with a Baco Noir- Muir Murray’s Eagles Soar.
When we arrived at Grand Pre, a special treat awaited us….