So you may have gotten wind around here that I’ll be participating in the Santa Shuffle in December! Boooooyah!!! I’m super excited! Truth be told, I have been completely off my exercise wagon for a few months now and I don’t like it! I have only ran two or three times since the Bluenose in May. I feel like I’m starting from scratch. The best part about this run, is that aside from being a fund raiser for The Salvation Army, it’s a fun run and most of the other Halibloggers are newbie runners!

The Halibloggers have formed a team and we plan to have lots of fun! (Word has it that Amy is attempting to organize an Ottawa “rival” team, (I added the “rival” part for fun 😉 ) so any Ottawa area runners who want to join here, GO and show us your stuff!).

In other exercise news, have decided to join Nubody’s because currently I’m not even a member of a gym! I love that Nubody’s has tons of classes and you can attend at any location (including Goodlife), and best of all Lesley, Jaime are members, so we’ll be able to get together to do classes and change it up! Variety definitely is KEY for me for exercise. It has to feel fun!

Oh and I discovered a fabulous soup kind of by accident!

At the same time that I made my Southwestern Sweet Potato, I also made a pot of sweet potato soup (recipe below). I wanted to use up the sweet potatoes I had on hand.

The soup was very simple and delicious (especially the next day): 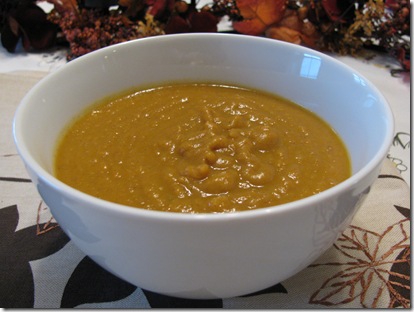 But it was missing “something.” You know, that “protein” part that you want to make it a balanced meal. Plus since it was a pureed soup, I was trying to decide how to add some texture. Then it hit me…of COURSE – ding ding ding! I just blogged about loving the sweet potato + southwestern flavour combo duh!

The recipe I made (below) for the southwestern sweet potato had lots of leftover salsa-bean-corn-cilantro-greens mixture left! 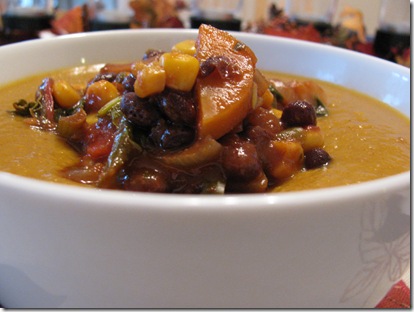 Heat the EVOO in a soup pot over medium heat and saute the onions until they are translucent. Meanwhile, grate the sweet potatoes (I used my food processor with the grating blade and it worked like a charm). Add the sweet potatoes and mix well with the onions & EVOO. Add cinnamon, jalapeno, chicken stock and simmer until the potatoes are cooked. Season with salt & pepper and puree to your desired consistency with a hand blender (or remove to blend in batches in a counter top blender.