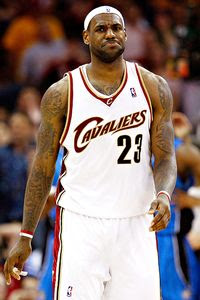 Lebron Needs “Mo” Help
Mo Williams has played Tonto to Lebron James’ Lone Ranger performance all year long, but just as the gun slinger is in serious trouble with the bad guys, Mo is a no show in what could be the final act of the season for Cleveland. Williams averaged 18 ppg during the regular season, providing the Cavaliers with much needed secondary scoring. It was a pretty nice story; Lebron does most of the work, Williams chips in a bit, and everybody else on the team plays a role. Williams is still putting up 17 points a game in the conference finals, but he’s shooting only 32%. With all the open looks he is getting thanks to double teams on Lebron, if Mo was shooting at least 40%, that would be an extra 4-6 points a game for the Cavs. Cleveland would be in the driver’s seat of a series that has gone down to the wire every game, including tonights game 4 won by Orlando in OT. If Lebron is going to have his dream match up with Kobe in the NBA finals, he’ll need Williams to start hitting his open shots, and soon, as Orlando is 1 win away from it’s first trip to the finals since 1994 when it was the Shaq/Anfernee Hardaway show. 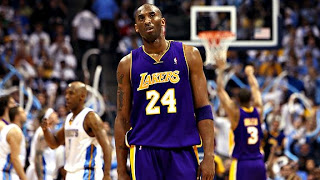 Kobe A Big Dissapointment in Game 4
Throughout his career, Kobe Bryant has drawn comparisons to Michael Jordan for his style of play, defensive ability, and competitive fire. None of these were on display in the Lakers humiliating game 4 loss in Denver. Not only was Kobe a non-factor offensively, he was awful on the defensive end, out hustled to several loose balls, showed no intensity on man to man defence, and absolutely horrible away from the ball. A far cry from his mentor, Jordan, who would have done everything possible in that situation to give his team a chance to win. Kobe looked like he was getting ready for the flight back to LA for game 5. Game 4 was the third road game in the past 3 weeks where the Lakers simply did not show up to compete. They are quickly gaining a reputation for being a team with no killer instinct, preferring to do just enough to get by. After regaining home court advantage with a guttsy win in game 3, their lackluster performance in game 4 wreaked of a team that was content on getting a split on the road. 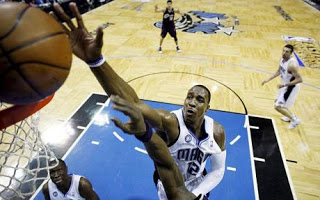 Dwight Howard’s Lament
After game 5 vs the Boston Celtics a few weeks back, Dwight Howard called out Head Coach Stan Van Gundy for allowing the Magic to get away from playing winning basketball. After watching the Magic nearly blow a game they should have won in regulation time last night, I can see why Howard gets upset.
When the Magic move the ball, penetrate with the dribble, and get the ball inside to Howard off ball reversal, they appear to be unstoppable. However, they fall into occasional traps where they over dribble (see Hedo Turkoglu) and fire up ill advised 3 pointers (see Mickael Pietrius and Rafer Alston).
Last night, as they squandered a lead to the Cavs, then fell behind early in OT, the Magic went inside to Howard on three consecutive trips. Three dunks later, the Magic were in control of the game and the series. Not bad for a guy who many basketball pundits were saying had no post game and did not need to be double teamed.