[Next up on the East Coast roots roster is a guest blogger who explains what growing up Scottish in Nova Scotia means.]

The year I graduated high school was the first and last year I ever waited tables. I spent the summer at the Hungry Piper Café in Margaree, serving tea, scones & oatcakes, and other local fare to a soundtrack of Celtic music (which we were also selling). My boss was a Gaelic speaker who wore a kilt to work every day, often matched eccentrically with a touristy T-shirt. We hosted Gaelic signing nights, and tried to serve our food in the traditional Cape Breton way.

I still remember the arrogant smirk on one particular tourist who asked me “What’s with everyone here borrowing culture from the Scottish? Don’t you have any culture of your own?”

Luckily, before my quick 17-year-old temper could reply, my boss stepped in to calmly but sarcastically explain that the name Nova Scotia (new Scotland, if you didn’t know) wasn’t chosen randomly and that some people’s culture didn’t begin when their ancestor’s landed in North America.

It was my first experience of cultural backlash. It would not be my last.

We’re not all Scottish here in Nova Scotia, though until recent years the marketing would have made you think otherwise. But just over a quarter of the population claims Scottish ancestry, and the Scots did play a major role in the building of this province. Plus, the names “New England” and “New France” were already taken.

I am a approximately a seventh generation Scottish-Canadian (not every line has the same number generations). I can trace every branch of my family tree back to the highlands of Scotland. MacLellans, Gillis, MacNeils and MacKenzies. MacDonnells and MacAurthers. The list goes on and on. (If you’re considering a joke here, don’t. I’ve heard ‘em all, and no the branches don’t overlap). 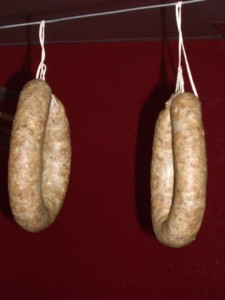 Hanging to cure in our garage

What does growing up Scottish in Nova Scotia look like? It’s not like the tourism ads would lead you to believe. I don’t play the fiddle or the bagpipes. I don’t own a kilt, and I don’t highland dance (OK, I do, but poorly). This province pushes the traditional Scottish culture hard, Bagpipers and fiddle players and quaint fishing villages with Gaelic signs attract thousands of people to our province each year. I’m as annoyed by the stereotypes as you are. Perhaps even more so, as I sometimes see myself in them.

I do step dance reasonably well, though I’m out of practice. I square dance as often as I can, which is never enough. In high school we’d often travel around the county, hitting 2 or 3 square dances a week. (No, we didn’t get beat up for this.) While I’ve never made very good oatcakes, I’m great with shortbread. Also while Haggis isn’t common in Nova Scotia, my mom and I still make isbheann (Gaelic for sausage, her old cookbook spells it espan) which tastes similar, but is dried & cured. This year for the first time we made white puddings, or maragan. I know which farmers in the Valley can sell me suet, intestine, or sheep’s stomach, and I’m not grossed out by any of them.

Sadly, I don’t speak Gaelic. Not yet, anyway.

My grandparents all spoke Gaelic as their first language, learning English only when they went to school. (In fact, they were punished for speaking Gaelic in school.) This in a country where Gaelic speakers once outnumbered both English and French speakers, and Parliament debated (and quickly defeated) a bill to make Gaelic our third official language. We Scots may have had numbers, but we never did have much power. 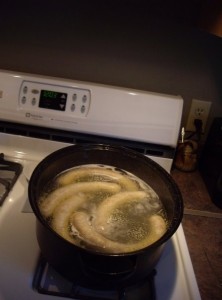 Boiling before it is stored in the freezer

My parents’ generation never learned the language, It was not considered useful anymore. This is not to say they didn’t pick some up. My parents know a lot more Gaelic than they even realize themselves. I was a teenager before I realized how many of the words I thought were slang were actually Gaelic terms Mom and Dad had picked up over the years.

It wasn’t until my grandmother’s funeral, with the parish singing a Gaelic hymn in her mother tongue, that I realized the tragedy of not knowing the language of my ancestors. While other groups are fighting for their language and traditions, mine were fading in front of me. So I searched out lessons and began to learn. It’s a long process, and I may never be fluent, but with the help of the new Office of Gaelic Affairs, and the few native Gaelic speakers left in the province, we may keep it alive.

Natalie is a writer, editor, environmentalist and adult Educator. She writes resumes & designs wedding invites on the side. You can find out more about her on her blog.