Every year Cokebaby and I try to get out to see at least one play at the Neptune Theatre. We’re not really ones for musicals so we tend to skip the performances of shows like High School Musical. For the most part we’ve been catching shows at the smaller Studio Theatre. 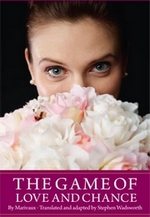 Due to the e-newsletter that they send out, I caught a great two for the price of one special for the final performance of their first play of the season: The Game of Love and Chance.

Going into the theatre, I had only the brief description of the play to go by but it seemed like it would be quite fun.

Dreading the prospects of an arranged marriage, and desperate to know more about her anonymous groom to-be, a wealthy Parisian mademoiselle trades identities with her maid prior to the introductory rendezvous. When the monsieur in question also has the same brilliant idea, romance, comedy and mayhem unfold.

I have to say this opening play really bodes well for what looks like an amazing season. The acting was brilliant, costumes and set design stunning. Even the choreography of movements across the stage between scenes was wonderful.

Here’s a list of What’s on Stage this season:

If you’ve never been or rarely go to see a play check out my tips on theatre etiquette to which I’d like to add one more point: would it kill people to not wear a sweatshirt? I’m not saying theatre going needs to be some elitist kind of thing. Far from it. I just think that sweatshirts are made for a single purpose: sweating in. Not exactly theatre attire. You know?