Last week I was invited to participate in the Neptune Theatre‘s Word of Mouth performance of Frankenstein. I’ve been waiting impatiently all summer for the start of their season, mostly for this play. Mary Shelley’s Frankenstein has long been one of my favourite books so I have to admit to holding the performance up to a fairly high standard. Those who are only familiar with the Hollywood version (with few exceptions including Kenneth Brannagh’s 1994 production) are in for a surprise. 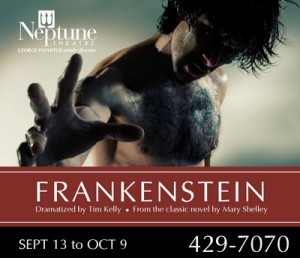 The book, and the play, deal with an array of issues that go beyond the cliché “monster” and angry mob of peasants. It’s the story of a man in pursuit of science and the morality behind what he does. The themes are quite timely considering all the tinkering that’s going on in the scientific community today.

Overall, the play was bit hit and miss for me. Let’s start with the hits. The set was a combination of traditional elegance for Dr. Frankenstein’s study and chillingly creepy when the large portrait was pulled back to reveal the science lab. Lighting and sound effects all added to the ambience. Hands-down the best part of the night was Stephen Gartner’s portrayal of The Creature: intelligent, crafty, and at times primal. Robert DeNiro’s version has nothing on him. He was a believable Creature, one with whom you can almost empathize. Elizabeth Richardson was a lovely Frau Frankenstein and Charlie Rhindress added charm to the play.

Unfortunately, the weight of the performance sat on Seann Gallagher as Dr. Frankenstein and I found his performance forced. Likewise Alexis Milligan as Elizabeth. They came off as caricatures of the people they were supposed to be and I found myself neither sympathetic nor interested in their respective plights. I hate that I didn’t totally love the play because of it.

That said, if you’ve never seen the “real” Frankenstein, I think it’s still worth your while to check it out. You’ll see a side to the story that the horror movies have glossed over since Shelley  first sat down to write this tale on a dare.