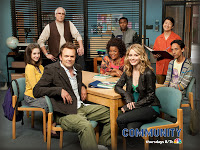 Thanks a lot, Community, for reminding me that Cougar Town won’t be back until mid-season. When I originally heard that news, I had basically the same reaction that Abed did. Luckily, I discovered Raising Hope and that helped get me through to the new fall TV season. 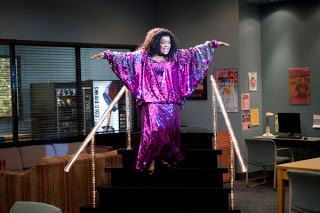 How much did we all love that opening song and dance sequence? I’m sure I can’t be the only one who was hoping that it was actually a commercial for Greendale Community College. I mean, I’d buy Dean Pelton as a rabid Glee fan.

Speaking of Dean Pelton, how great was his face-off with John Goodman as Vice Dean Laybourne? Laybourne is head of the Air Conditioning Repair school annex, which is apparently rather successful. I love the idea of Pelton having an enemy, and Goodman was very intimidating – he even had some minions shave off Deal Pelton’s new goatee.

The main storyline of the episode centered around Pierce’s return to the study group, and Jeff’s expulsion from it. Pierce had returned from the summer a new, more mellow man, and he wanted back in the group. The group seemed ready to give him another chance, but Jeff wasn’t. He theorized that there was no need for everyone to take the same class (Biology) since they never study anyway and could embrace the fact that they’re a group of friends, not a study group. It would have been a nice sentiment if its sole purpose hadn’t been to ostracize Pierce. 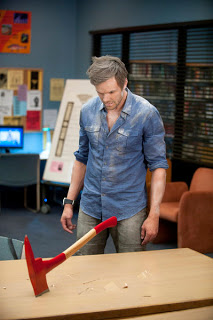 Cut to Jeff getting kicked out of Biology by the scary ex-con prof played by The Wire‘s Michael K. Williams (Omar!), meaning Pierce gets that vacant spot. Suddenly Pierce was part of the study group and Jeff was being offered his own “We’ll see you when we see you”. It was brilliant.

Then there were some movie references I didn’t get, but I’m going to go ahead and assume that people familiar with Stanley Kubrik enjoyed them. (Anyone?) I didn’t love the whole Chang is living in the vents thing, or the whole monkey poison thing, but it didn’t spoil the episode for me. Seeing Jeff go totally postal was great, and Pierce lying to cover for him was a good way to redeem that character.

In the end Starburns got kicked out of Biology and Jeff earned his way back in, so the whole gang is back together again. All in all, a solid (but not stellar) start to the third season. Here’s what else I liked: